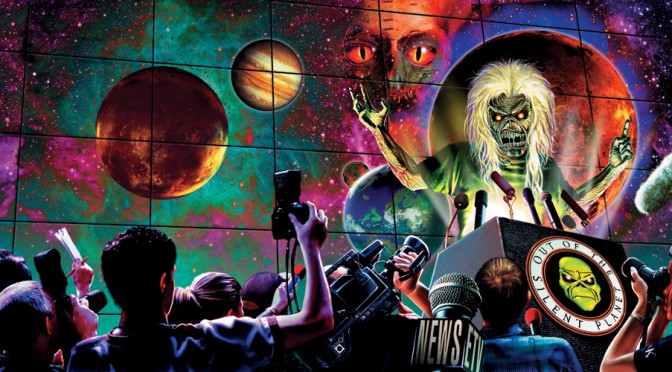 I like records. That may be an understatement. I don have as many as I would like to though, but I only have vinyl these days. Many has been told about vinyl and its magical quality, I just want to tell you abou the moment my love affair with it started.

My parents got rid of a ton of their records after the CD-player was launched. The vinyl record was of the past, a relic of a bygone age apparently. At some point I started discovering those and listening to classics like Pink Floyd, Uriah Heep, Deep Purple and a load of David Bowie.

There’s something about putting a bit of vinyl on the record player. It demands care, attention and you’ll be keeping an eye on things, because before you know the record is over. I loved listening to those old recors with their crispy start-up sounds. It was great.

I started buying cd’s when I was 14 I suppose, after I was confronted with the might that was Metallica. Man, I was instantly hooked. I went to the record show and bought myself the Ozzy Osbourne‘s ‘Ozzmosis’, De Heideroosjes‘ ‘Schizo’ and Iron Maiden‘s ‘Virtual XI’. So yeah, my first Maiden was not with Bruce Dickinson strangely, but Blaze Bailey. Weird… I was captivated by these bands and I would often return to this shop in Veghel to check out more.

A few weeks later I found ‘Out Of The Silent Planet’. It was some sort of limited edition digipack single, but there was also the Vinyl. Wow, Vinyl… and a picture disc at that. The imagery of Iron Maiden had immediately captured my attention, it looked futuristic, horrible and awesome. I took the CD home, thinking that was smart. I didn’t have a record player.

I couldn’t sleep that night, I needed to have the vinyl. It was torture, what if someone else bought this special edition? What would I do then? I went back as soon as I could and purchased that record. That was my first one.

Later followed more and ofcourse a record player. Now, It’s vinyl all the way baby. I can’t tell you why. Was it the bigger pictures, the captivating sound or the ritual of playing them? It’s a vinyl thing, you’ll probably never understand… It’s all about holding some actual music in your hands, physically with its analogue workings. It also explains my loyalty to Maiden I suppose…

A special edition of underground sounds from Iceland, with Naðra , Wormlust, Auðn and Abominor . Am I jumping that Iceland black metal bandwagon? Well atleast for this round up, I guess I am.

The stars are right. The serpent has awoken. This band from Reykjavik features an all-star line-up from the Icelandic black metal scene (which, to be honest, makes it easy to get an all-star line-up). Members are active in Misþyrming (4/5) and other acts that make up that typical sound. The title means ‘All Paths to Oblivion’ and is the first full lenght effort of this band. The artwork is a copper engraving and the band does have a bit of that Celeste or Deathspell Omega thing going.  Those are the facts.

I mention those names, because the sound blends atmospheric, vibrant sounds with a brutal, full on wall of sound to create a mesmerizing spectacle from the first tones of ‘Fjallið’. Relentless the sound surges on and it does take a few listens to get through the primal roar and experience the hidden majesty of the band. It takes all the way to ‘Fallið’ to get a moment of the clean, folkish roots of that form the sound of this band, which is brought as an intermezzo during the 9 minute song. The pace slows down on that track and brings a purifying experience back to a slow wind down. Absolutely a great record, so recommended listening.

“I mean, if you’re on the fringe of the black metal scene in Iceland, what does that leave you with?” said vocalist Hjalti in this cool piece on Icelandic black metal (grapevine.is). It describes well the position of this atmospheric band, who are on the fringe of a fringe genre in a fringe nation. The band is one of those who get lumped into the post black corner here and there, which is a bit hard to explain. Maybe its the interest in landscapes and not showing band pictures that makes them unique?

Bleak and barren are the landscapes that the band paints in their music, with melancholic and merciless music that cuts you like a knife. Their soaring guitar work combined with meandering rhythms forms imagery in sound, though the band also manages to sound brutal and fiery now and then. Then there are the mild passages, with gentle guitar play. They are brief, but offer a glimpse at the beauty that the band also embodies. Though harsh, the bittersweet melancholy of the songs is convincing and easy to pick up. Even though the lyrics, presented in a hoarse but controlled bark, are in Icelandic this band speaks to you in all their glory. Outsider art is the best art, am I right?

This record hits you like a brick to the fucking face, after which you feel the psychedelic display on its cover is a much more logical thing to behold. The record has been out for a while, but a re-release was inevitable. The band has two members and has been around in Reykjavik for about 13 years, playing a very distinct, very own brand of black metal. I mean, this shit is real, it’s not something for the weak to listen to and the first time I put on some wormlust, I turned it off after about 5 minutes.

Abominor is anoter group, hailing from the city of Reykjavik. Not much has been released this far by the group, apart from a demo in 2010 and this ep in 2015. A meagre harvest, but not a disaster if the quality is right. The main tipic is death and all its futility for the band, which explains the swirling cover, depicting a sort of emptiness after all. Noticable about this band, is the fact the band moves into post-black metal and black/death crossover with their sound. An intriguing listen.

After a brief intro, all gates are open and thick, layered slabs of sound are delivered over doomy rhythms. The fat, textured feel of this sound is clearly different from the other bands I’ve been checking out, offering more of a chunky, heavy handed approach by creating dark and overwhelming soundscapes. This sound envelops the core of the black metal assault as a misty blanket when the torrent unleashes. This full and grand approach is probably how the end-times will sound. Turbulent and wild, this is some heavy stuff.

Records! From The Underground! This time The Black Heart Rebellion, Clandestine Blaze, The Lion’s Daughter and Batushka.

The Black Heart Rebellion – People, when you see the smoke, do not think it is fields they’re burning
9000 Records

Anything from the Church of Ra is worth your listening attention, and so is this bit of music from Ghent, Belgium. This is no laughing matter, this is serious, this is artistic sound that should not be played in the background but one should be immersed in. It’s the third album of the band and it denotes another change and growth of the ensemble. Is it metal? I don’t know. If it is, it’s a stripped down version that is approaching the corner of martial folk street with ritual doom on the Amenra bus I’d say, from the calm roads of eastern meditation.

This is one of those records you’ll come back to. It’s calming rhythms, the threatening vocals and the mild music combine into a mystical experience, for example on the track ‘Om Benza Satto Hung’. This is more a spiritual quest in the deep parts of India with a dark spirit looming over you. Chimes and primitive drums can be heard, guiding the ritualistic nature of the song. A song like ‘Near To Fire For Bricks’ takes on a whole different feel, with its gloomy atmosphere and at the same time seductive sound. The voice is commanding and rigid, in contrast to the free sounds that make up the music. It’s pretty hard to describe, but it is a trip to hear this album. This is one of the missing gems in my year lists from 2015.

The production is lo-fi, gritty and distorted. There’s no attempt at speed, Aspa remains very close to the atmosphere of original black metal bands with powerfull vocals and a never ending torrent of hazy guitar parts. There’s no real sonic extravaganza going on, just a drudging rhythm, the bark of Aspa and dark and foul lyrics, like on ‘Fractured Skull’. The typical BM riff and drum roll is ever present, making it all sound raw, fuzzed out and monochrome. It’s black metal at its raw and pure core, reason enough to check this out.

These Polish blasphemers have been in my playing routine for a couple of weeks now, but I can not ignore them any longer as an essential mention in the Sounds of the Underground series. The band from unknown parts of Poland has released one single and this album and further all information is unknown. Mentioned on their metal archives page is that they are in fact from famous bands. So that’s how much is known. It would explain the extravagant beauty of this record.

The most impressive element in the music is the Gregorian chanting with deep baritone voices, which gives it both a liturgical as well as a notably eastern-European vibe. In a way the album reminds me of Ghost, but then the full on, no breaks, no god, no fear version of that band. The dense sounding black metal is illuminated by the chanting, giving it an ethereal, compelling sound that is full and warming.  That might also have something to do with the neat production, that seems to flatten the sound somehow. It’s not enough to hamper its forceful appearance though. This brings blackened doom to its logical conclusion without trying to be either retro or progressive.

The Lion’s Daughter – Existence is Horror
Season of Mist

With a name like that you probably would expect something else than the onslaught of sound that awaits you on this record. It’s the second full lenght of these Missouri natives, who somehow manage to mix up a potent blend of black metal, sludge, grindcore and more that will knock you of your seat. Seriously, combine Converge, Neurosis and Goatwhore and you may approach what these gents deliver in a sweltering, dirty package of violence.

The lead is really on the vocals, to which the whole guitar parts seem to cling like hot tarmac. Melodic riffs illuminate the grimy bass lines, that are accompanied by guttural barks filled with despair. In a way the band manages to capture a similar feeling as Primitive Man, with an obvious dislike to human kind. There’s an uncanny ferocity in the sound of the band, which allows or pushes them to use brutality over anything else. Only the guitar parts are left standing to give some sort of beauty to the tracks, where there really is none. There is no rest for the listener, no respite, just an oncoming slaughter of sound. Don’t doubt the musicianship though, its what makes the band so frightning, the purposefulness of every hook and riff.