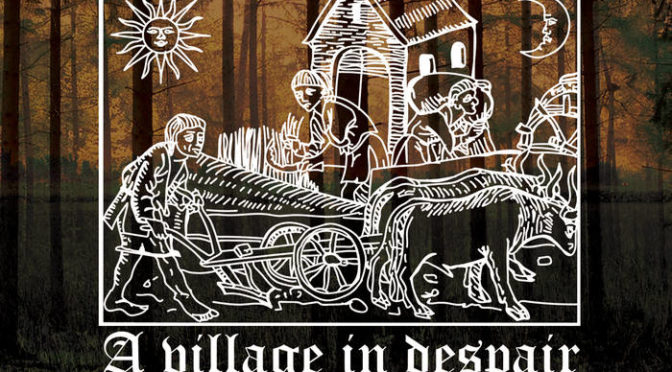 Black metal from Sri Lanka? Really? Yes, this band hails from the island near the south of the Indian subcontinent. A Village In Despair has chosen this style for their message of, well… despair in fact. They tell the story of the rural villages on their island nation, through this music style. This EP is their debut, and it’s one hell of a calling card.

The group from Colombo started out as a band last year and signed to a label, dedicated to music that shakes it seems, signing this Sri Lanka band among electronic music acts. A bold move, but also an important one for the band, who released a single and EP in the same year. It’s some astounding music that sticks.

The opener is ‘The Promise’, which kicks with a grim riff and a guttural howl, evoking the classic imagery of a gibbering moon and solemn nature as classic black metal does. The pace is like that as well, creeping and slow, but as the song progresses it becomes even more languid. The vocals seem to bubble up like they’re trying to break the surface of a swamp that keeps sucking them down. The guitar work sounds very much classical and melodic, which is working well for the atmosphere and attractiveness of the song. But damn, those vocals creep the hell out of me.

This guitar perseveres on ‘Hope & Longing’, which oozes the same despair, but soaring, tremolo riffs create a particular hollow in the song. It, even more, expresses a void. It’s that emptiness of the subsistence life that they try to convey. To really embed the song in the locality, spoken word passages are added in the native language. A shiver runs down the spine when you hear this in combination with the almost painful atmospheric black metal from A Village in Despair.

We close with the even so painful ‘Helpless’. This is one exceptional record and it should be out there more. Listen to it and let it all sink in. Not tombstones, satan, and demons, but the reality of despair.