Ok, wow, so I went to see a short performance of the group Blush at the neighbours yesterday during the yearly Stukafest. During Stukafest bands and groups will perform in student rooms and in this case in the Pavillion build next to my window.

I was astonished by the powerful act of three men, who blend imageries, gender and conceptions of sexuality in a pounding, shocking and devastating act with sound-samples, loud beats and crawling ambient atmosphere. Lights provide an even intenser look at the three. This video gives  a slight impression of the show.

I was quite overwhelmed. In a way, both men and women get completely dehuminized in this act that reduces people to objects for lust. The fact that it’s three guys doing it, makes it even more powerful in my opinion. They are very convincing and when they stare you in the eyes, you can’t help but look away. The act is a mix between performance art and dance, executed to perfection with a whole lot of art and I recommend seeing it if you can.

Sexuality is something that should be fun, nice and good, but in this current world it is too often reduced to a product, a commodity. Gender-patterns are still as rigid as they ever where. This performance made me hope that the world is finally turning a corner and becoming more tolerant.

Satire is a sort of glass, wherein beholders do generally discover everybody’s face but their own.

Another day that shocks the world. The assault in France on the Charlie Hebdo office was all over the news today and understandably. Another attack in the heart of Europe. The comparisons with Utoya where soon made ofcourse. After having just read the book of Asne Seierstad on Breivik, the events hit me hard.

In fact, I just received an e-mail from Asne Seierstad, who I wrote to thank her for the book, when I picked up the news on TV. Men shooting and shouting things in what seems Arabic? Hard to say, I don’t know these languages very well. The acts are like a shard of ice in the heart though.

A police officer is gunned down with what seem to be assault rifles. He is on the ground, writhing in pain. When one of the shooters approaches him in a rapid stride, he shouts something to the man and holds up his hand in a gesture of futile defence. Without even slowing down the gun is raised on the run and the officer is shot in his head. Another dead to avange the prophet Muhammed, who was mocked in a cartoon by the Charlie Hebdo magazine.

The magazine had actually been assaulted before, which only made the resolve stronger of the editors to say what they felt they should say in the voice of satire.  Excersising one of the basic rights that we value so dearly in the western world. Sure, they went pretty far and we know that the muslim community (pardon the generalization) is not too understanding of what satire actually is. Still, you don’t see this coming. Or did we? It clearly hurts, regarding the massive respons to the hashtag #JeSuisCharlie.

The officer was shot in the head for a drawing, for a funny drawing of the prophet of Islam. So where 11 other people, amont them editor Charb and other well known writers for the magazine. Why? To avenge their God, apparently. “We have avenged our prophet!”. Now, I’m familiar with the bible and I’m told the Quoran has similarities. If there is a God, which I’ll gladly leave to everyone to decide for themselves (this is also a right), then God is in the view of these religions an omnipotent God.

If God is omnipotent, then I think he can avenge himself pretty easily on this puny human cartoonist. If God is omnipotent and vengeful, he knows what to do about it. This is after all the God that drowned everyone, so he knows how to do some ‘avenging’. God does not need anyone to do his avenging for him, which is the actual core message to take from all those holy books. You know what God can’t do? Make you love another, feel pity for another and make you forgive. That is the only thing he (again, hypothetically) can’t do for you.

I find myself thinking that the sword needs to be fought with the sword sometimes. It’s hard to see any good in this world as it is. I feel so sorry for the people left behind after these murders, so sorry for the families and children, friends and all around them who now face these holes. I also pity the gunmen, whose hearts are filled with hate. A hate I doubt they understand.

I disapprove of what you say, but I will defend to the death your right to say it.  – Voltaire (attributed) 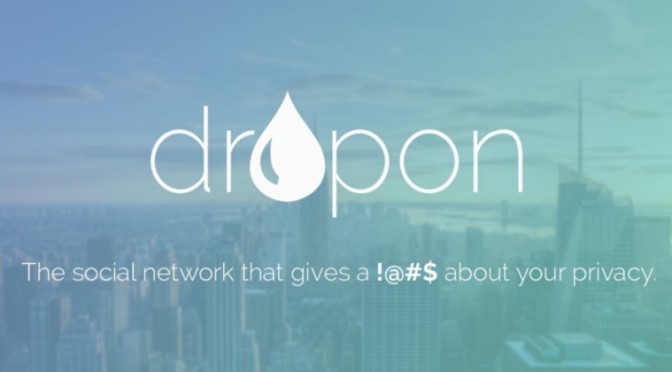 I’ve been trying out this new piece of social media, named Dropon, and I’d like to discuss my findings here in a brief way. If you like to follow me on Dropon, go ahead. 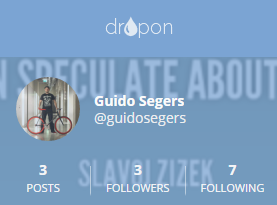 The big advantage of DropOn is one you don’t see as an end user, but has everything to do with why people hate facebook: Privacy. Dropon claims to encrypt, protect, NOT share and give you total control of your privacy (read it here).

So what does Dropon do?

What it has in favor of twitter is a very spread out, calm look. Twitter is not a calm medium to look at, it’s high traffic is rather overwhelming in fact. Here you see the sidebar that Dropon offers. It looks cool and calm and you know all of these things already. Dropon in that sense is not aimed at a target group that has not been on social media yet, it’s the same old stuff really.

The way it works is pretty similar to the media you know, just the names are different. You can do something with the way the font appears, which is cool and lacking in the traditional channels.

The most interesting thing is the settings Dropon offers. Your profile is not something you can manage and customise that much, but it offers an open field option, which is cool. The thing Dropon does best is offer a very clean and clear menu structure, specially when it comes to privacy. Something different, compared to the dense, complex and hidden settings of facebook. Compliments for that. It also looks like it will work very well on a tablet or smartphone, but an app is not yet available.

Hello? … is there anybody out there?

The biggest downside of Dropon at this moment is that it copies twitter when it comes to finding followers and people to follow. Sure, you can easily look for ‘drops’ to follow (like ‘Marketing’ or soon I would imagine ‘Sexybabes’), but finding people you know is quite hard. Hence the call from users on twitter for followers. Dropon offers no way to look for contacts, something that even Linkedin offers (and twitter). It also lacks the option for groups that facebook has.

If you are one of the people that has big issues with privacy of other social media (and rightly so!), then Dropon might be a place for you. Currently it seems to be a bit of a ghost town and questions have been raised on how the makers plan to make some money out of it. I expect very little of Dropon and due to its redundant functions, it appears to be the next social media ghost town.