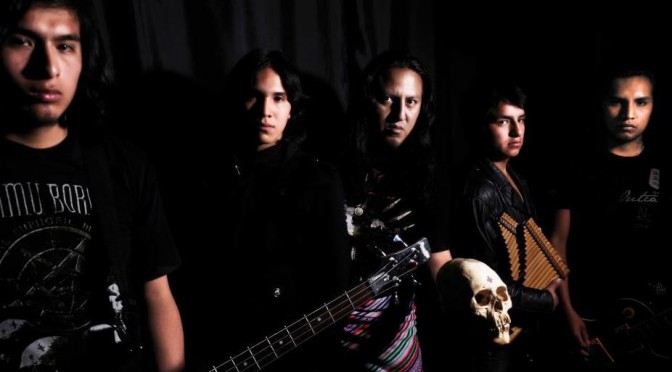 Metal is a global phenomenon that takes all forms and shapes. When it connects to indigenous cultures, beautiful things can happen, but it can also inspire refreshing things elsewhere. One of those intriguing bands is Indoraza from Huancayo, Peru. This interview appeared originally on Echoes & Dust.

Bandleader Luis Pariona Avila was kind enough to answer some questions about their music and projects, vision and background. The band has been around since 1998 and released mostly demos and ep’s, but now is working on a bigger project.

Normally you’d associate Peru with the pan flute tunes and the colourful robes, but there is room within that culture to combine those indigenous elements with furious metal that tells the story of the darker days the country has faced, but also connects to the present.

Read about inspiration from Norway, Andean history and tradition and making metal in a place like Peru.

Can you introduce yourselves and tell us how you got into metal music? Do you have any other bands / projects you are working on?

Thanks for the interview, hello from Luis Pariona “Pishtaco” leader, guitarist and founder of the band. I was involved in other bands like Yana Raymi, which plays death folk metal and Ancestral, which makes pagan black metal … but now we’re doing hard work with Indoraza.

How did Indoraza get started as a band? What does the name mean?

Indoraza was born in 1998 with the sole intention of paying tribute to our ancestors, our culture and Andean worldview. Indoraza comes from two voices “indigenous and race”. Those voices refer to the blood lineage we trace to the ancient inhabitants of our American ancestors. Race we define as identity, not a term that can be mistaken as racism. 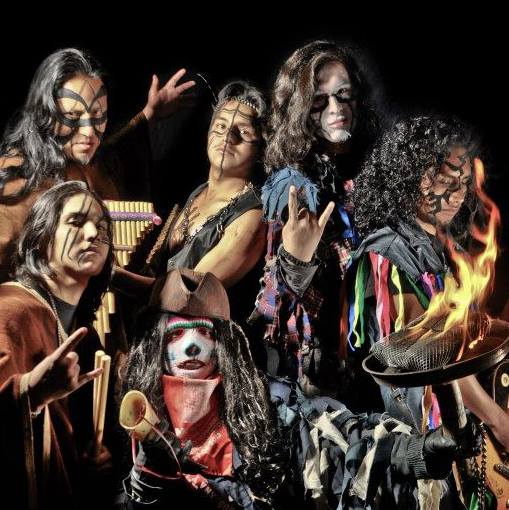 What is the history and the concept that you are telling us as a band? What inspires you?

Indoraza (indigenous race) traces back to early 1998 taking from other projects such as As Ayllu, Danger, Psycho. Back to the year ‘99 with a stable group and under leadership of Luis Pariona “Pishtaco” we started writing songs with Andean lyrics that speak about situations, that we witness and experience in various regions of countryside Peru. We also focus on customs, myths and stories of the land. The musical orientation is hard rock on a basis of rock’n’roll, blues and heavy metal.

After a while the group split and there was a break in the months following that. Luis Pariona (guitar, vocals) recruited Abel Fares (drums) and Jim Castro (bass), who were later joined by Jhon Castro as a second guitar. Indoraza kept this lineup for some time and recorded demos like:

The band also toured across Peru and Bolivia in 2007 with a tour titled ‘Ethnic Holocaust’. In 2008 Boris Camayo (drums) and Carlos Miranda (bass) were recruited, with the goal to record those themes that were in the air and for the fans that were waiting for that moment. On the 1st of june 2009 our CD ‘Yarawi’ went on sale, which is the first opus of a hardrock Indian trilogy made in Ayllu Sañachkan (Saño) – Huancayo-Peru.

In 2010, the following two discs ‘Miski Simi’ and ‘Chosheck’ were released. Our first album came out in 201, titled ‘Todas Las Sangres’, which is part of a new trilogy: “Los Andes No Creen En Dios” (“The Andes don’t believe in God “).

In 2015 the next opus ‘Ayahuasca’ will be released in honour of the ancestral people!

Don’t the Andes believe in God? Why did you pick that title for the new trilogy?

During the time since the European conquest and invasion they brought religion which was forced upon our land with violence and lies. Many communities and ethnic groups today have ceased to believe in the mercy of that European god and that omission of it remained deep in their heart.

The trilogy the band is producing now speaks about all that feeling covered in the harsh reality matched with the customs and traditions in danger of extinction. In the Andes it is not enough to believe in a single god but it still remains more ancestral gods’ beliefs because there is a need and faith in them. Ayahuasca is the title of our new album the second instalment of the trilogy “the Andes do not believe in God”.

Especially in this production we are including numerous Amazonian themes and atmospheres. We implement instrumental and lyrical stories that deal with the ritual of Ayahuasca, which is a drink that transports you to other dimensions to proper focus and balance your body, mind and spirit.

You describe your music as Andean metal, ethnic pagan metal and hard rock indigena. Can you describe or explain what you do musically?

Technically, the instrumental structure of our music includes many styles, such as thrash, death, heavy, power, etc. but the main theme and ideology of the band is based on our ancestral culture and Andean worldview. Our fans classified us as indigenous hard rock, folk metal or pagan metal etc. We prefer to call ourselves, following what we do, as Andean metal.

The Andean man is a human being who was born, inherited from the nature and remains alongside the rivers, niches, and homes that make up the Andes Mountains which extend throughout South America.

What are the bands that inspired you to get into metal and inspires Indoraza as a band musically?

Can you explain a bit what the traditions and history are that inspire you for people unfamiliar with them?

We start with the history of the Inca Empire, its science, agriculture, astronomy, medicine and religion. These things we inherited from other nations such as Wankas, Chankas, Tiahuanaco, Nazca, Chachapoyas and many more cultures. Each of them contributed much to the development of a people with great goals. At some point, these  cultures were cut short by the European conquest but they still achieved a balance and their legacies remained.

What do you think of metal as a global thing? Do you feel it is global or very local? Can you relate to a band from Norway or Russia?

The metal is a global overall musical structure that is shaped emotionally, ideologically and spiritually with local features that every artist wants to capture and honestly, it fits properly.Possibly by merging our national folklore and metal like the Norwegian or Russian bands do. We admire bands like Arkona, Turisas, Moonsorrow, Korpiklaani…

What sources inspire thematically (not musical)?

The sources are the traditions, our history and worldview of the environment where we live and what we witness every day. The Andean history was always a source of inspiration for the man of the Andes, Andean music is magic and fits perfectly to the heavy metal.

Can you tell me how metal music started out in Peru and how it developed? What bands were more influential and important to the national scene?

I’ll explain in a very broad sense about metal in Peru. It has its traces back to the late 70’s and early 80’s with a great wave of bands that appeared nationwide, but mostly in the Peruvian capital of Lima. Obviously, before that, there was hardrock, blues and punk music, which has its own history. Bands that came up then were Mortem and Kranium for example, who are still going strong and considered national metal icons. You would also start seeing bands in the provinces, like Hadez, Inri, Armagedon and Masacre.

What is the scene like these days? Are there important clubs, labels or venues that are worth mentioning? It is bigger in certain cities?

The scene is growing. In the last few years the country had the opportunity to bring great icons of the metal genre over and organise some festivals with a good reputation. It’s still all about maintaining clubs and labels and make the profitable. Maybe there are some doing that successfully in the capital, but it’s difficult to maintain this in the provinces. On the other hand, there is a lot of considerable talent, creativity and musical skill in Peru. This country is rich in music and art, there are bands that keep up the fight, regardless the limitations.

Does metal culture face any form of censorship or repression in Peru? From either the church, the state or society itself?

Not really, maybe because the metal scene is still growing and there are other major issues for the churches and the government to deal with. There is no tangible repression or censorship at the moment, but it might be worth mentioning that metal is not very much distributed by the media. Probably because it’s not as marketable in comparison to other countries. That might look like repression in Peru, but it’s just a disinterest of the media in this music. Another reason for its lack of visibility is a lack of proper instruments and affordable recording studios.

Though I can’t make out everything on your page on Facebook, it seems you are a band socially aware and active. Can you comment on that?

Well, we aim to pay homage and tribute to our culture and our ancestors, making and perfecting our art spreading it in the most honest way we know doing this kind of music. Our country had to go through many stages: one was civil war or revolution but it brought great harm from the government and it still subsists political elites who are even now trying to rule unfairly at the mercy of peasants and poors, thing that we do not tolerate and that we raise in our songs.

Can you name some bands that are now active in Peru, which you think everyone should listen to? And why?

The bands that I am listing should be mentioned because they have displayed great talent and originality.

Do you think there is something typical about metal from Peru? That makes it different from the main stuff from the USA and Europe. Could you describe it?

Indeed, the history and culture that originates and comes out the veins of every Peruvian and the heritage which they carry in them are reflected in the “riffs” and songs. It contains a unique essence in its music that makes it fully different compared to other bands from other places in the world.

What does the future hold for you guys?

We do not know exactly, but we are dreaming about playing with great artists in great metal festivals all over the world. 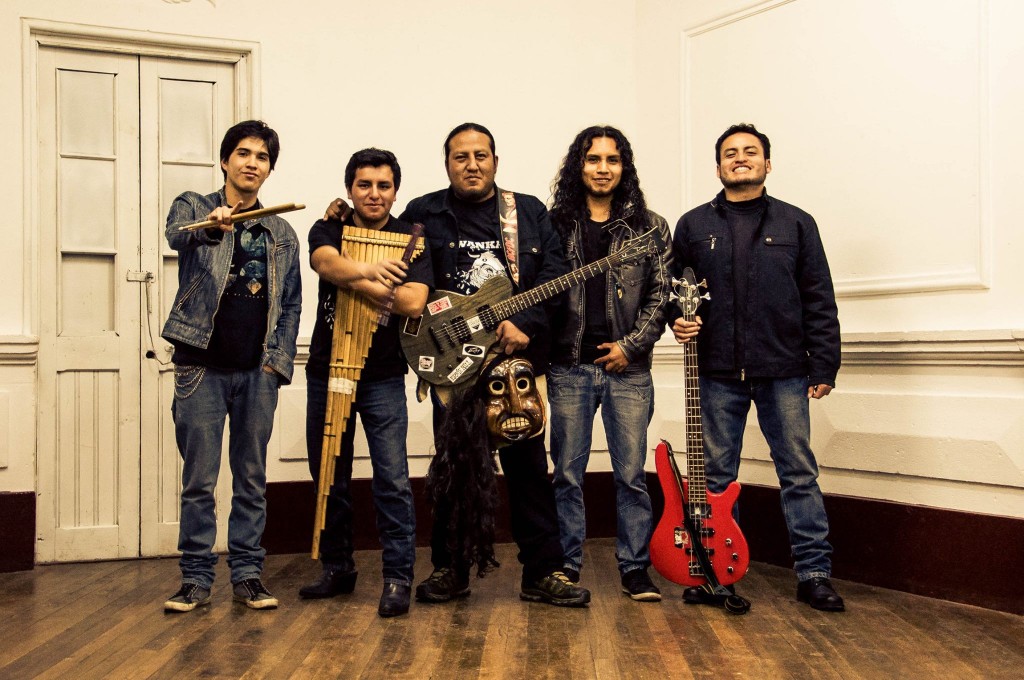 Please use the space here to share anything you want to add. Also type where people can find your music.

I’d like to thank you for the interview. We hope it will be well spread. You can contact us directly and easily on our Facebook page.
www.facebook.com/indoraza

Pictures with kind permission from Indoraza

Last reply was 11 months ago