Unfortunately I got a bit sick in the bus from Warsaw to Kaunas, so perhaps we didn’t go see as much as planned on day 2, but it was still a full agenda. I’ve tried to get some pictures of things, but it’s not that much.  Thanks to Doctor L. I was able to see some cool stuff again. 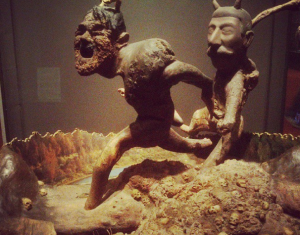 First we headed out to the Devil’s museum. The Lithuanian painter, politician, poet and what not Žmuidzinavičius started collecting Baltic pictures of Devils during his life. Now, I’m always a sucker for the occult, so a collection like this has enough relevance to my demands. The many fascets and deeply rooted place of the devil or demonic figures in the national culture is astonishing. He fulfills the role of bogeyman, helper, trickster, seducer and ofcourse the master of hell. Technically he replaced the traditional pagan spirits and sprites. On the picture we see two devils that are still very relevant to the country.

From there we continued to the War museum, bringing a long history all the way from pagan times of the Lithuanian military. Unfortunately the staff was not very friendly and many items missed some actual explanation. Wether it was the portraits of king and archdukes (Lithuania had only one king), or the room filled with guns. The English audioguide also sends you of into the museum on a wild goose hunt for the different items. Lot to be done for this museum to get a bit better.

Interesting was the part of the exposition, concerning the Lituanica. An airplane that was supposed to fly across the ocean but crashed 650km from Kaunas in mysterieous circumstances. It has become an important part of Lithuanian history. The 10 lita banknote actually has the airplane and the faces of the pilots printed on it.

The final destination of the day was the ‘Ninth Fort’. Part of a defensive ring build around Kaunas by the Russians, it served as a fort, a prison and finally as a place to herd unwanted elements  of society towards. Many people lost their lives in this fort, but also heroic things happened, like the escape of 64 prisoners who were selected to burn corpses of other victims of the regime. The museum consists of an exposition about the turbulent times outside the fort, inside the fort and a guided tour through the tunnels. To me that was the most exciting part of the tour, because I’ve seen quite some occupation museums and they start breaking down your feeling for it. 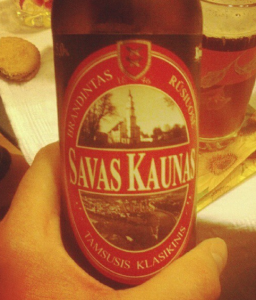 Afterwards there was time for rest, food and beers with the family. It rarely feels as well deserved.