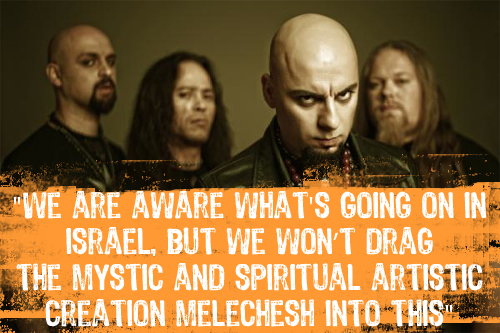 A long time ago I did an interview with the band Melechesh. The group was originally from Israel, moved to Amsterdam in the Netherlands later for its political freedom, a bit like the golden age of philosophy.  The band deals thematically with Assyrian and Armenian mythology.  Add to that some Mizrahi rock and there you go: unique metal. This is the interview I did with Ashmedi, main man of the band, in 2010.

Could you kindly tell us who you are and where you come from (musicwise as well as lifewise)?

I come from Jerusalem  my family are Armenian/Assyrian. Musically I come from the rock and metal background but I listen to any and every type of music as long as it is well done . Life wise I am a cosmopolitan who lived around the world and now settled  in this nice , tidy and quiet  corner.

You’ve moved the band from Israel to Amsterdam/France, how was that decision made and what were the reasons you had to move?

Well the reasons were several, many demographical and socio political reaons. Also we wanted to progress our music.  The member who was in France is now doing his PHD in USA so he flies often here to writing sessions and rehearsals.  Coming to Amsterdam was a coincidence actually , I was on my way to USA when my x bassplayer who was living here said Amsterdam got English language Universities, I thought ok its closer to Jerusalem .

Theres a mix of nationalities in the band, how does this influence your writing and creating process?

Well and it does not change our writing process. Though we got to learn that you should not make music at any cost like we used to believe in and was the way we work,  but rather pay attention to personal convenience which comes first here. In Jerusalem there are many different people from all over the word , same as with Los Angeles where I lived as well so always managed well in cosmopolitan places.

Is there a political element to your music, and if so what is it? What were the comments when you released the ‘As Jerusalem Burns… Al’Intisar’?

NO , the middle east is much more than politics, it is a place were civilizations were born. We focus on this beyond the mundane but tragic drama . Politics are merely the art of lying and rationalizing human deaths. We don’t play that game, and we say our politics are simple we count the dead and we think everyone deserves to live in dignity. Can you imagine an entire region with many countries billions of people thousands of years of continuous civilizations is categorized by one cliché.  We are critical and know what is going on there but we do not drag the mystical and spiritual artistic creation known as Melechesh in this.

When As Jerusalem Burns …Al Intisiar  (by the way the title is meant metaphorically, as we love our home town ) was released well hell broke loose J we survived it. There many critical of us but in the end we make music with spiritual and mystical context so we did not hurt anyone. ( maybe the righteous can learn for this ). But such things made us appreciate making music and we are grateful to where we have reached today

Could you tell us what Mesopotamian Metal is, what it envelops and what it is you tell about? Obviously for us it’s a very strange and unknown world.

The style of music is already popular in the metal underground and there are several young bands adapting to it which is really cool. But for the readers Roarezine of let me elaborate more on this.  When I started Melechesh the philosophy behind the music was to create not re-create.  So we tried inventing the Middle eastern sound of Black/thrash metal.  Which encompass hard rock and heavy metal as well but with an ethnic twist when it comes to guitar riffs and picking as well as at time, Middle eastern drum patterns.  Lyrically  we deal with Mesopotamian mythology near eastern mysticism .

Musically who are your influences, metalwise as well as traditional music wise?

I grew up on rock music at home  with time I was drown into heavy metal and punk and got into various types of bands. As a musicians we are shaped by diverse music intentionally or unintentionally. From Metal music , I like the classics black sabbath, led zeppelin, rainbow also Mercyful fate some Metallica , Slayer , Bathory it is hard you know ! traditional musicians I am very much into Persian Indian cross over like Ghazal, Indian ragas , sufi music .

Your new album, The Epigenesis, is almost out. Can you tell us about the process and the record?

The album took a long time to write , almost three times to record. Its is a long album with diverse moods , from a 3 minute song to a 12 minute song.  We decided to break the mold and we flew to Istanbul to record the album. Many here were surprised but the outcome spoke for itself . Istanbul was a unique experience and very inspiring one.  The city is very inspiring for musicians, it is great for night life and culture, and very Metal. So many metal bars out there its crazy.

Everything worked out perfectly it was almost uncanny like how come every step every decision was fitting in like a piece of puzzle , it was quite mystical . It was also very practical to be there, as people were helpful no 9-5 mentality we did put in 16 hrs a day . Also the little things you know you want to order a meal at 3 AM while still recording , its possible. You can even order you wine and whisky at those hours. The little things helped keep the vibe positive. The weather was good too.

How has your work been received in Europe this far?

Well previous works always well received,  we got fans across the globe, positive record sales and the fact most labels offered us a record deal  was very  humbling and a good sign.  As for the new album the general press media is good.  Topped various critics lists, several cover stories I cant ask for more and we are grateful for this.

Did starting a black metal band in Israel spawn a lot of followers? Are there other metal bands from the Middle-East that you would recommend?

You need to be able to differentiate the various parts of Israel. The fact that it was in Jerusalem was the issue.  AT first people wanted black metal bands from Scandinavia , if the band was from there the fans show the horse teeth with unconditional smiles and frown on bands that had to fight to make music. But this changed. A lot of hard work development of a type of music eventually paid off.  We had followers there, but our larger fan base is in USA and Europe.  There are several talented bands in the middle east they work hard some even were jailed for doing the music they are passionate about.  For sheer brutality check out Keaton, for Melodic doom check out Bilocate. There is a cool rock band called Khalas and so on.

Are there any bands that you would compare yourself to?

What influence does living in Israel have on your music and on your life and  views?

Some people fight to have a decent life and when they get it they appreciate every second. Some have it all served on a silver platter and deep inside they are very unhappy. This is one thing I learned.  I also learned how racist humans are. I personally believe in one race. Human race. And thankfully I am very color blind.

Where do you see Melechesh going in the future?

Are there anything you’d like to tell our readers, that they should know about your band?

Doe het normal is a bad thing for music and art but  a good thing for accounting.

What Album should we start with?

The Epigenisis for sure not because it is the new one but because it represent us now and it has several moods.

If Melechesh would be some kind of food, what food would it be?

A healthy salad which has flavor ! and considered as soul and brain food.