In the far north, metal has found fertile soil through the years. Finland was late to the party, but is pretty much the most metal nation in the world these days. Just across the Russian border though, a small scene has been brewing in Karelia. A prominent band in these parts is СатанаКозёл, which translates as Satanakozel (Satan’s Goat).

Though the band seems to be mostly having a good time, there’s a deep appreciation for nature, their lands and traditions inherent to Satanakozel. Their last album, titled simply ‘Север’ (North) is a testament for that. Though never very prolific due to their inherent issues (you’ll read about that soon), the band has been a staunch touring group and loves their metal.

I found drummer Nicolai Kuskov willing to answer some of my pressing questions about making music in Karelia, touring, the relation to Finland and how reverence for the nature goes together with good old fun.

Can you kindly introduce yourself and tell us a bit about how Satanakozel got started as a band?
Hello! I’m Nickolai Kuskov, the drummer and the co-founder of Satanakozel. Me and Vasiliy Kozlov started the band in 2002 as a nameless duo, in 2003 we have got the first full line-up and started to rehearse as SK. Nowadays SK is a 5 piece band:
Vasiliy Kozlov – guitars, vocals, folk instruments
Nickolai Kuskov – drums
Dmitriy Dobrynin – guitars, vocals, keys
Vladimir Savvateev – guitars
Dmirtiy Makarov – bass
I must mention that we never thought that it could grow bigger than just another garage band, we never had any special goals, we played music only for our own good, nothing more, nothing less. Great that it grew in a something bigger.

What bands influenced you and made you want to make this type of music?
I suppose most of the readers can recognize these influences, the bands from Finland, Scandinavian bands had a huge effect, also the folk music from our region did the job! 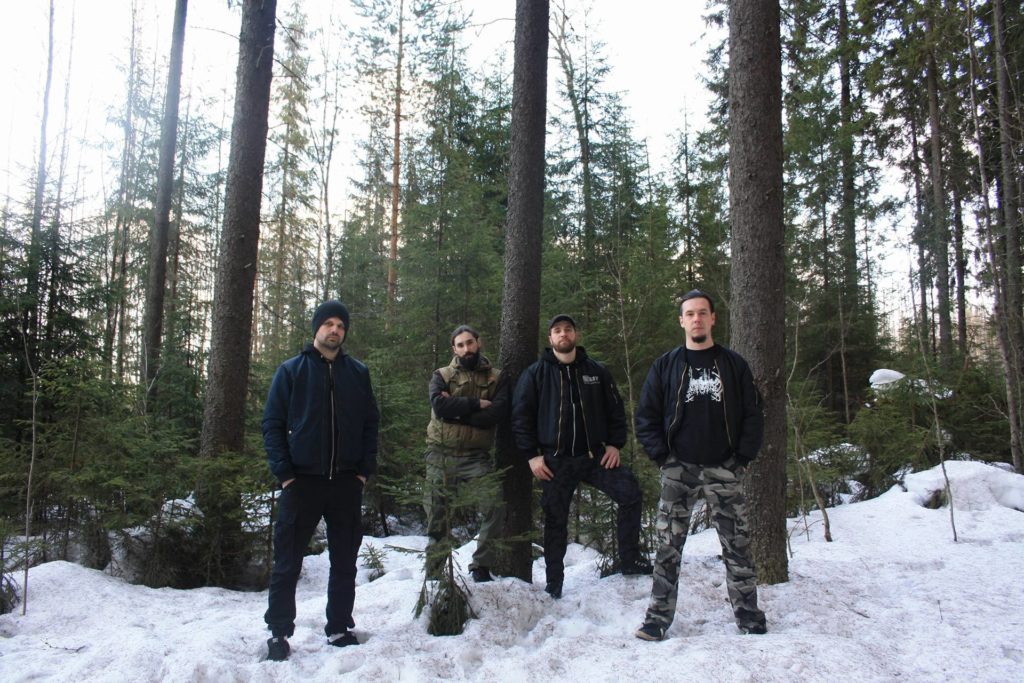 I can definitely hear some Finnish influences in your folk metal sound, would you say that is correct and is there a connection between bands from Karelia and Finland?
Yep, you’re right, we are impressed with the Finnish and Karelian folk music, which are quite similar. We share our myths and legends with Finns and, that is why there’s a connection. We do not have a lot of metal bands from the Russian side of Karelia, so I do not know about the rest.

How would you describe the message that Satanakozel has for the world? In biographies you’ve written you’re free from politics and that the band is about nature worship and fun. How do you bring those together?
Well, one would think that our lyrics are full of humor, jokes and so on, but the serious meanings are hidden under the mask of fun. The song ‘Pivovar/the brewer’ is an example, it may sound like the song about how good is to drink beer 24/7 but the real meaning is telling the listener that heavy drinking leads you to death. With the latest album we did a few serious lyrics, the topics are WWII, North and its power, but still we have enough humor.

How did you guys come up with the name? I understand it’s a silly sounding name in Russian and it started as a joke, but how did it stick with you for a good 15 years?
It was a local joke. The ex-keyboard player put our band on the roster of the festival under that name, because we had no other ideas how to name the band. I think we didn’t even think about it. We wanted to change it, but we never came up with anything better, haha.

So what is Satanakozel up to these days? It’s been awhile since ‘North’ came out. Can you tell me a bit about what direction you guys are planning to go in?
We are looking forward to start composing the new album. The biggest problem is Vasiliy Kozlov, our main composer, lives about 400 km from us. It is quite hard to get in touch with him because there’s no mobile coverage, internet or even basic phone in his village.

We tried to gather together at his place to compose something, but it all ended with a vodka and beer party… Still, we have a lot of ideas for the future songs, looks like it will be even more “metal” than “folk” as we did on the last album. Personally, I’m tired of all these shitty pseudo-folk metal bands with the same melodies, same sound, same lyrics.The style itself became too boring, there are no great newcomers and the veterans do not care about the quality of their music.

Also, we would like to have as many gigs as we can. We already did a few tours in Europe, this summer we’re going on the road again.

You clearly identify as a band as being from Karelia or being Karelians. How important is this identity for you and in what way does this appear in your lyrics as it is written that you guys use Karelian folklore in your lyrics.
It is very important for us, especially for me and Dmitriy Dobrynin because we both have Karelian roots. Our cultural heritage gives us a lot of inspiration to compose the music and the lyrics, we have lyrics about characters from local folk tales and legends such as Priest Sivolday, Kullervo from the mighty Kalevala Epic.

We identify as Karelian, though that doesn’t mean we don’t like our mother Russia, it’s just simply closer to our hearts and spreading our culture is important.

Since most people don’t know much about your part of the world, can you give some general outline of what the folklore and mythologies are like from your region?
Is mostly the same as in Finland, it is based on Kalevala Epic, also we have Russian folklore.

What does nature mean to you? Is it something that is generally a large part of your lives?
Northern nature is definitely a big part of us, we spend a lot of time in the forests. Vasiliy Kozlov earned his living for a few years in hunting and fishing, so you may guess that nature and its gifts are the most important part of his life. It always will be the biggest influence and inspiration for us.

It appears that there’s quite a little metal scene in Petrozavodsk. Can you tell a bit about that? You have described yourselves as a DIY band, is that what the scene is like there as well?
There’s no metal scene, Petrozavodsk has been mostly punk/hardcore town, just 2-3 bands and these bands are the side projects of SK members. I can mention only heavy metal band Aspaziya, great USSR metal style!

From the very beginning, we’re trying to do everything without any interference from aside. I run my own recording studio, where we record our music and I do the graphic design for the band. Dmitriy Makarov is in charge of the mixing and mastering process (he did the sound of the “North” album)… I think the DIY thing is the best way for independent musicians, go DIY now! 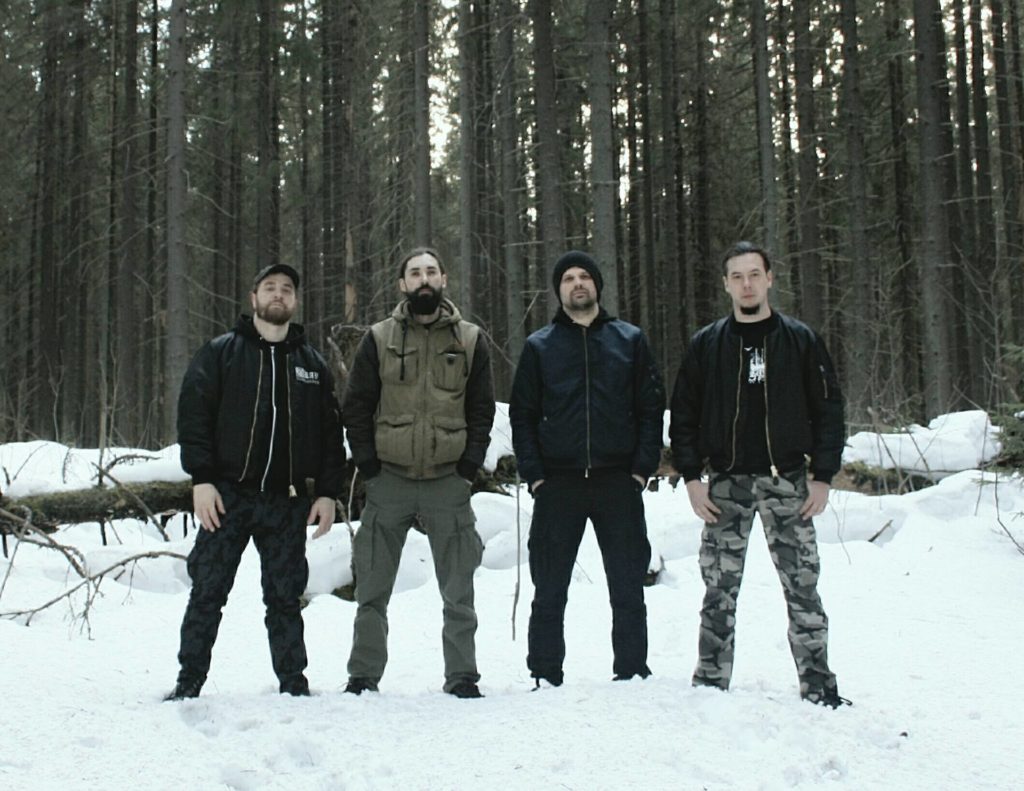 In a sense Karelia is a remote part of the world. The only way to go farther north is Murmansk. How do you think this shapes the music and words that you use?
As I said before the nature of Karelia is the main influence for our music & lyrics. I have nothing to add, just turn the latest SK album on and try to feel it. I highly recommend you to visit Karelia, especially the Paanajarvi national park.

You’ve chosen to be a-political as a band. How did you get to this decision in a world that is so overly political these days? Especially living in such border region. Is this a decision as a band or are you guys also not interested in politics as individuals?
Yep, we are a-political band and it was our choice since we started SK. We all know what is going on in the world, but we never trust the news from the state TV channels, even the independent media became corrupted. Seems like most of the people in Russia are completely brainwashed about the rest of the world. I’m traveling a lot and talking to the people from different countries, that’s how I make my conclusions.

So, what does the future have to offer for Satanakozel?
We’re planning a summer Eurotour with Grai & Gjeldrune, also we will try to get together to start working on a new record. I think that’s it, no special plans.

Final question, if you had to describe yourself as a dish, what dish would it be and why?
Lohikeitto, fish boiled in milk, sounds weird, but the taste is awesome! Try it once.