In the wide fields of Lithuania an ancient people once lived, who were known by many tribe names. The Yotvingians, Aukstaitians, Skalvians, Curonians and the warrior tribe of the Samogitians dwelt in these ancient lands. Being the last part of Europe to be Christened in 1413 finally, by their Grand Duke Vytautas, the nation has a devout dedication to Christianity, but somehow it’s never fully Christian.

For centuries Lithuanians have gone to the forests, building their crosses and little altars in semblance of the Christian figures. Still the altars and holy places remained and recently the old ways have reemerged in a way that is surprisingly big and up to date. Perhaps the pillars of the ancient tradition are just so clear that it isn’t hard to bring them to this day and age. Music is a huge part of that and Ugniavijas brings that to life in a way that feels authentic and sort of hauntingly fitting.

Though they claim to sing war songs, as shown by their previous record ‘Karo Dainos’ (War Songs), they don’t sound brutal or so, but like beautiful harmonies of male vocal singing. ‘Ten, kur krisim’ (Where we will fall) is a captivating journey through the ages. The uncanny tone and unusual timbre keeps you listening to songs like ‘Kai aš jojau ant vainos’, where the language itself determines the sound. The chanting is flat, tribal and focussed on the rhythm.

Boisterous singing is th emain part, but traditional instruements fill up the sound to a complete experience. Bagpipes and the well known kanklės are very present, but also more of those hypnotic instruments like the lumzdelis. It oozes into a mystical experience of bold men braving the field of battle against those that try to take what is dearest to them. Home, hearth and gods.

Though the words are difficult to understand, this is the sort of music that is typical for the old Balts. Emotional, full of vigor and with a sense of fatality. None lives forever, but the harmonie of life, the bravery, it makes sacrifices a noble thing and that is what you can find in the music. 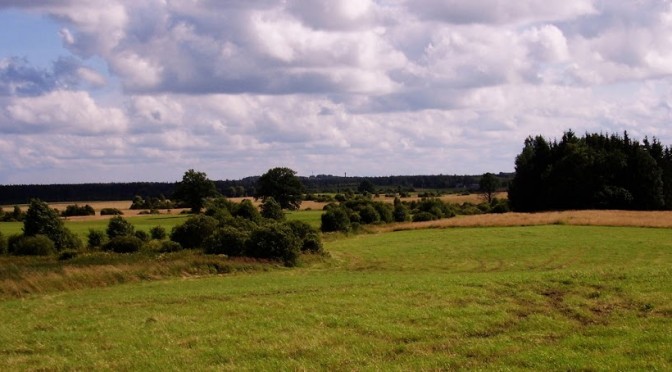 With the interview I did with Romuvos there came a whole appendix with further information about pagan traditions in the Baltics. I like to share them here.

Calendar Feasts of the Pagan Balts

Pusiaužiemis, January 25th
Mid-Winter Festival, though in some parts of Lithuania they celebrate Kirmeline instead, whcih means Day of Serpents. It’s the day when symbolicly the snakes wake up from their winter slumber. Food and milk is put out for them, and if it’s gone later it will be a good year.

The exit of Winter essentially waits for Spring and helps prepare for the new season. The holiday consists of processions, costumes, tomfoolery, games, and plays. The main parts are: receiving guests with treats; rides and races; processing the More statue and then destroying her by fire; plays with people costumed as animals, strangers and mythological beings; performing the war of Winter with Spring symbolized by the Lasininis (the bacon-being) with the Kanapinis (the hemp-being); portraying weddings or funerals; spraying people with water; fortune-telling.

Velykos, Spring Equinox
Christianity incorporated Lithuanian equinox traditions into Easter, and replaced the ancient Lithuanian name for the equinox with the Slavic word ‘Velykos’, i.e. Easter. ‘Pavasario lyge’, meaning Spring equinox, remains the only non-Christian name for the holiday. The week before equinox, called the Velykos of Veles (souls), concludes the annual cycle of commemorations of the dead. As during Kucios (Winter Solstice Eve), families remember their dead and leave their dinners on the tables overnight for the veles to eat.

Jorė, Spring Festival
Samborai, Spring Festival
Sambariai, which names the ritual meal at the conclusion of sowing, or Paruges, which means the day by the rye. Households gathered on their fields with food and drink, where an open-air ritual meal was held. Households held the ritual separately; it was not a community rite. The ritual included ancient sacred songs called dainos and ancient ritual rounds or sutartines that blessed the grains. Families would prepare for Sambariai by stocking up on food, especially meats, and by brewing a special beer (traditional ritual drink and libation beverage). If the ritual was held at home, the house would be decorated with fresh-cut birch branches. Occurs at the end of May, after the planting of rye and other grains is finished and the seed has grown. This tradition survived undisturbed until the beginning of the 20th century in parts of Lithuania. Sambariai also once marked the start of the swimming season.

Rasa, Summer Solstice
Order of celebration: (1) dancing around the gates, (2) dancing around the kupolas, (3) misc. games, predictions, circle dance, (4) vaises (ritual meal), (5) greeting the setting sun, (6) lighting the bonfires and offerings, (7) visiting and blessing the fields and trees, (8) principal bonfire, burning of the More (straw doll symbolizing the old), circle dances around the bonfire, (9) swimming and bathing, a boat with a bonfire sails to shore, symbolizing the nocturnal trip of the sun, (10) casting the wreaths (11) greeting the moon and the stars, (12) worship of the rising sun and bathing in the morning dew.

Rugių Svente, Rye Harvest
Beginning with the end of July and throughout August — depending on the growing conditions each year — the Lithuanian farmers start to harvest rye, the single most important grain cultivated in Lithuania. Rye is a divine grain; its fields are sacred. The harvest begins with the ritual Festival of the Rye, which expresses thanksgiving for the harvest. Women and men wear their finest white linen for the ritual, and harvest the rye in these clothes.

Dagotuves, Winter Rye Planting Finished
Velines, All of October
Velines is in honour of the Veles, the shade of the ancestors – either of the family or the village. Because families would live in the same house/village for centuries, Lithuanians came to believe that the veles acted as guardians for the family and for the village. This is when the veles would enter the family home for the rest of the winter – leave at Velykos to go into the fields, to encourage the fertility of the land.

Kučios/Kaledos , Winter Solstice Eve – Beginning of the Year
Marks the end of the year, when the world returns to darkness and non-existence. However, as death begets birth, the two holidays also herald the rebirth of nature and the return of the sun. The Lithuanians distinguish the two subsequent days, now celebrated on the 24th and 25th of December, with a variety of ritual customs.

Baltic deities.
Here are the gods and dieties of the pagan Baltic people. Mind that the perception of Gods was/is different than that of current day Christianity.

Other Gods:
Jurate: The queen of the Baltic Sea was a beautiful mermaid.
Kastytis: A son of the earth.
Siaurys: The North wind.
Aitvara: Considered to be divine creature, regulates relations and wealth
Pilnytis: The wealth god.
Kovas and Junda: War god.
Ausaitis: The health god.
Ganiklis: The schepherds’ god.
Keliukis: God of roads.
Milda: Godess of freedom.
Krumine: Godess of corn ears.
Nijole: Wife of the underworld god.
Medeine: The goddess of woods and trees.
Austeja, Bubilas: The goddess and the god of bees.