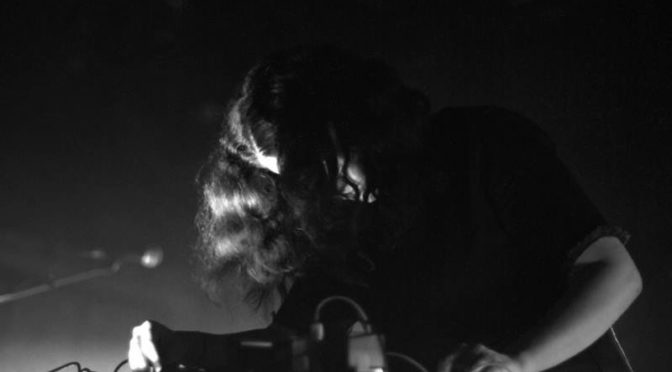 The primal movements of the earth can be felt when Bismuth plays its second set at the Ladybird Skatepark at Roadburn 2019. Slow, purposeful drone doom, delivered with a mantra-like repetition over a fundamental groundwork of drums by Joe Rawlings. The guitars produce a growling, textured sound that hits you like sonic waves with full force.

On guitar is Tanya Byrne, who also plays in Monoliths, Nadir and Dark Mother. Having been pummelled by the live delivery by the band, I wanted to know more about the duo from Nottingham and contacted Tanya to ask her some questions about Bismuth, sound, studying the environment, gear and, of course, playing Roadburn.

Interview with Tanya Byrne from Bismuth

I understand you are originally classically schooled, if I may use that term. How did you move from that to the music you create now?

That’s right. I play the piano, played clarinet in an orchestra and studied music theory and composition. I think I moved to drone when I discovered minimalism. Artists such as Arvo Pärt and Terry Riley. Space is an important feature of that, and I wanted to see if that could be explored within the sphere of heavy music. So much metal tries to bludgeon with riffs, but I feel contrast, space and dynamics are needed for something to remain heavy. That’s why I loved Lingua Ignota so much. It has a weight to it, without the usual metal and noise tropes.It would seem that this background really shapes your approach to music than, which is not based on, let’s say, the pop format songs. So where in this development did feel you transitioned that classic approach into a metal framework?

It happened when I was around 25. Through minimalism, I started to discover bands like Khanate, Asva and Sunn O))). For the longest time, I found guitar-based heavy music boring, but these bands showed me that heavy music could be interesting.

I like your mention of Arvo Pärt, because his music is for me essentially attentive listening and very heavy in its intentional nature, as every note has meaning… What attracts you to the minimalism and more so the slowness in music (as you play ‘very slowly’)?

The focus of minimalism is what drew me to it. You have to give each note your full attention. Playing slowly helps with that. Nothing can be rushed and you have to exist in the sound. Everything else falls away as the sustaining of the music becomes everything.

What does heavy mean to you and what role does volume play in that, which is what most people would assume to represent heavy?

Heavy is more of an emotional response. Volume can be helpful in reaching that intensity, but for me, the intensity in performance is so much more important. I’ve seen bands that are quiet in volume, but their music has a connection that makes it truly heavy.

I’ve seen you perform, but I wonder how you feel you put the heavy in the performance you deliver with Bismuth. Is it physical or in your own experience of the meaning and voice of the music?

A lot of my lived experience comes out in the music. Obviously, both Joe and I are fans of volume to add to this, so that comes out too. When we play, nothing else exists. I see nothing and just share what is normally hidden.

Is the meditative aspect of that sound on some level relevant to what you do? And by that, I mean the ritualistic or even religious aspect of music, but also may be a connection to your academic field?

Very much so, yes. Becoming lost in the sound is a form of meditation. It not so much religious for me, but I definitely think that playing so slowly helps me feel connected to the deep time of the geological record, in a small way. People need time and space to contemplate processes that take millions of years, and I think the state of feeling nothing but sound and time can tether me to that. Day to day worries fall away, and for a time, notes seem like infinity.

I am intrigued by the connection though, between your academic interest and music. Which came first and when did you first connect them like they are on ‘The slow dying of the great Barrier Reef’?

I’ve been playing music since I was five, but I only started studying environmental science within the last 6 years. Barrier reef was the first time I attempted to connect the two. The music and themes arose due to my increasing frustration with the world government’s inaction on climate change. I read journals pretty much every day showing the way in which humans are degrading our environment, and I can’t believe the inaction of governments around the world.

There’s a lot of disinformation going around, or fake news as we call it today. Was that attitude, the inaction, was it a driver for you to connect these two?

Or was it something brooding already to make this connection and just got this push here.

Both. As a scientist, it’s very frustrating to hear talk about ‘beliefs’ when there is solid evidence that climate change is happening, and that our species is causing it.

For you as a person, what does it mean to bring these two together? Is this a platform?

I’m not sure if it’s a platform so much as me trying to process the thoughts I have around this subject. It’s great if others are prompted to research, but joining music with this subject matter helps me deal with the anger and despair that I feel at times. It’s difficult to maintain hope when all you read about is destruction and death, but we must hold on to hope and work together.

For me, as a listener, your performance felt very cathartic too, as the music is delivered with a certain laborious effort. It helped to connect, to move in harmony with you as artists. Is that something you feel is important, this connection through the music?

The connection is one of the most important aspects. When you are playing with others, it’s important to get into the same space. I’m not very outgoing in real life, and the way I connect the most is through playing music.

How big is the role of your equipment when you play music like yours?

Very. Very important. I use multiple amplifiers set up so I can use each amp to cover a different frequency range.

Coming back to your approach of music not as simply bludgeoning with riffs, is this an example of your way of creating this heavy effect?

For sure. Cutting the bass amp and reintroducing it later can help add heaviness. I also run different effects chain for each amp. It’s important to have different amps for different tonalities.

So what is your process when creating music, because by what I read about your gear expertise it feels like an engineering job, so I was wondering if you could describe how that happens?

Generally, Joe or I will have an idea, a riff or a drum beat. We then work in that for a while and see if it’s something we can expand on. Vocals are always written secondary to this, as layers of sound are very important to us.

Is there a lot of tinkering with the equipment involved?

Yes…I tend to have a pretty precise idea of the sound in my brain. There have to be lots of playing around with pedals to match up the sound I am aiming for.

Do you consider yourself a bit of a gearhead?

Yes, in other aspects of my life I work as a programmer, so I get really interested in tech of all kinds.

Now, this is usually a pretty male-dominated terrain. Is that something that ever came across your path of an artist and do you notice the shift that’s happening and was very visible at Roadburn this year?

Yes, I have had a couple of amps and pedals custom made for me, and only I and the person that built it knows how to work them. This still hasn’t stopped some guys trying to tell me how to use my own equipment (they usually shut up after they see us play). Sometimes I feel like I need to be super nerdy about it so I can stand my ground in male-dominated spaces. It was very heartening to see that Roadburn is showing that creating experimental music is not just the domain of men.

So, can you tell me about your Roadburn experience and history?

Both Joe and I are so overwhelmed by our experience of Roadburn. Becky, Walter and the rest of the Roadburn crew are amazing. When they asked us to play a second set in the skate park. We couldn’t believe it. I watched the Lingua Ignota show there and it was amazing.

Bismuth started 8 years ago and we’ve recorded two albums and a few splits and EPs., but this was our first performance at Roadburn, yes. We’ve done a few tours in Europe and the UK. We have always wanted to play Roadburn and were so so excited to be asked.

But then to get a second set, what was that like?

Disbelief! When my friends told me about the queues for the first set, I really didn’t know what to think. It was a great honour for us.

Did the second one feel different?

Yes. I think we were both more at ease. I’m not sure why, perhaps it’s because it’s more similar to the usual places we play? I think its because its closer to the DIY spaces a lot of the bands are used to normally play. I definitely felt more comfortable there

Do you think Roadburn is a different place to play?

Definitely. I think many bands aspire to play there. The friendship and open-mindedness of the people that attend is something I’ve never experienced at any other festival. It’s really special.

What does the future hold now for Bismuth?

In the next couple of weeks, we are playing Northern Discomfort fest in Copenhagen, DIY fest in Nijmegen and Raw Power fest in London. We also have a show in Leeds with Thou and Moloch. That should be fun. After that, we are going to take a little live break to focus on writing for our third album and a few splits.

If your band was a dish, what would it be and why?

Hmmm well, it depends who you ask! Joe would definitely say kebab. However, I would say tasty lentil dahl, with rice and chipati. We would both agree on tasty Oreo brownie though.

Is that because you both like it or is there a more complex idea?

Haha nope, we both just think it’s tasty. I think it would match is as it appears sweet but can be intense.