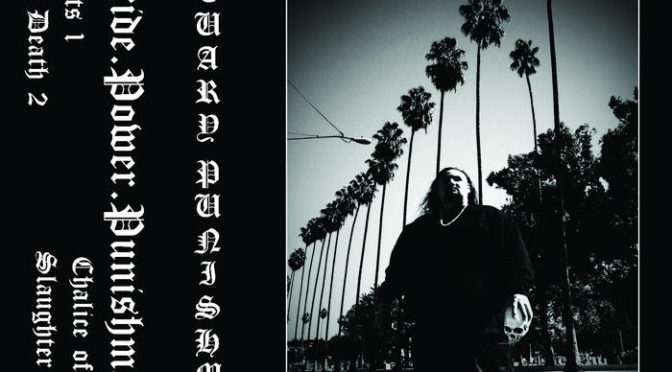 What if your wilderness is the streets you live in? That is what shapes the sound of Mortuary Punishment, who make music inspired by the violence on the streets in Pomona, C.A. It captures something much more raw and random than the wild forest, it captures human life on ‘Pride.Power.Punishment’.

Mortuary Punishment is Bigg o))), and the record starts with the Ghetto bird (the police helicopter) and news samples about the stuff that is going on there on this doom release. The music gently comes up and hits you in the face with a bit of that Latino SoCal Punk rawness to it. It tastes spicy as hell. Not surprising, because the creator is also involved with Xibalba.

‘The Streets I’ is an intro for the record, with all the samples, so we start with the punishing ‘Streets of Death’, which is raw and raucous death doom with a rather lively pace and gurgling doomy vocals. The lyrics offer a straight-forward doom stomper: “Angels marked for death. Weakness will be destroyed. Destroy the light.” Now that’s some heavy punching right there. Sure, musically it’s simplistic, but not less effective.

We soon turn to ‘Chalice of Suffering’. This track picks up the pace after a stop-go introduction song. The repetitive riffing keeps the tension up and you imagine the wall of death to break out any moment, but instead, we move towards a slow, grinding break before we launch into full speed. It’s just bad-ass all the way. Crushing riffs and gut-punching drums, it doesn’t stop. Mortuary Punishment really focusses on the cavemen simplicity. Effect. That’s all that matters. ‘Slaughter the Sheep’ is the crushing final chapter of this crushing, primordial release and what a record it is. Check out this punishing release and get smashed with this dangerous bit of death doom!