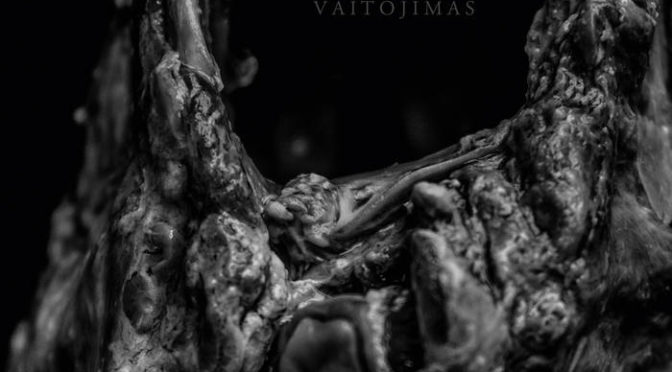 If your band prompts a discussion on whether or not what you make is metal, then that probably means you’re interesting. Erdve from Lithuania is definitely a band that would prompt your interest if sludgy, dark mayhem is something you’re into. As it happens, I am and the record ‘Vaitojimas’, released in 2018, deserves all the attention it can get.

This is, in fact, the first release by the band, who were fortunate to be taken straight out of the demo pile onto a release. Members of the group have previously been active in acts like Nyksta, Sraigés Efektas, and Spirale.

It needs to be said, that Erdve truly adheres to the blackened sludge movement that seems to stick to whatever vestiges of the metal scene are still standing in 2018 and they run with it. Their sound is thick with atmosphere from the atonal riffing, creating a vast amount of space and a sense of something big happening on the opening title track. ‘Isnara’ attempts a little nuance with long, repetitive passages that really don’t do much more than keeping the vibe coming along with the sludgy riffing. The vocals are a furious hardcore bark and never really deviate from that sound. At some point though, things get slightly repetitive.

That sound is what the band persists with on ‘Prievarta’, where the vocals are really the only big stand-out factor for the group. The sound just keeps up its bludgeoning ferocity and hardcore anger throughout. while never releasing their catchy clarity. That requires clarification, but suffice to say that the distorted riffing and thundering rhythm section are always easily distinguishable thanks to excellent production. I have to make special mention of the track ‘Apvertkis’, which really starts with a more grungy mood and vibe. It’s much more melancholic and lacks the aggression of the further record. That makes it exceptionally captivating.

We end the album on a high note, with ‘Atraja’. A rugged, bitter and vitriolic track of pure grim-sounding sludge, masterfully crafted and captivating from start to end. Erdve has really established a name for themselves with this release and I can’t wait for more of this Lithuanian piece of violence.