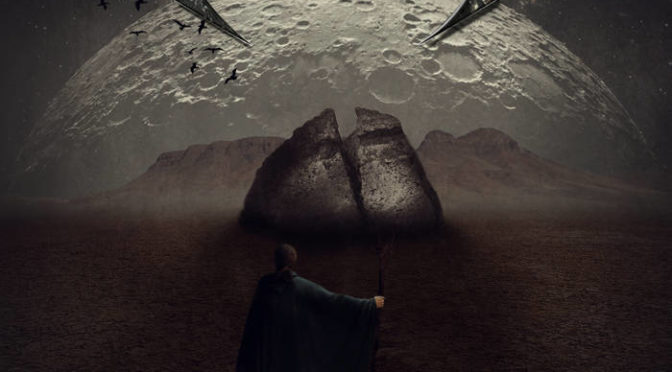 It seems that the creation of ‘Shrine of the Ancient Gods’ has been a process of multiple years for the Georgian band Iahsari. The first songs were released back in 2016 and without a labels backing the band steadfastly worked on the creation of their masterpiece. And what a grand piece of work it has become.

‘Shrine of the Ancient Gods’ takes a page out of the books of melodic death metal, folk, operatic metal and what not, to create an epic work of great proportions. Taking a number of musicians, guests and the old stories of their native land, they’ve created a piece of storytelling that can’t be denied. An album that captures, rocks and tells the story.

String instruments set an urgent intro to the record, connecting the vibe to the ancient lands they hail from with flutes and all. There’s a cinematic quality to the music of Iahsari, because after these three minutes you’re deep into the story already when the blaring horns welcome you to ‘Unbowed (Blood of Colchis)’, referring to an ancient Georgian kingdom from Hellenic times. It helps that the track stays in the flow of the intro for a while, before one tasty guitar lick and the synths take up the story. Operatic vocals are the surprising first singing entrance, with traditional drums following in the outro. By this point, I have to state that this record is something special.

As the journey continues with ‘Sirenum Scopuli’ and ‘Shatilis Asulo (Maiden Of Shatili)’an experience follows that most closely resembles the big, operatic performance of Therion on their Gothic Kabballah. Big vocal parts, choirs chanting and guitars that hark back to the traditional heavy metal days of Iron Maiden and Saxon. The vocals of Marian Chakvetadze and the male backings do most of that, but the intricate melodies and complex musical structure add a layer of grandeur to that. Moving onwards, we go into more tempered waters with ‘Gelino’ up to ‘The Dream’. The music is simply soothing, the voice angelic and never is it really getting rowdy or more intense.

That greater flow of the record helps in the story, which climaxes with ‘Old Man’s Grief’. A gentle tune, that swells in intensity to operatic proportions and riffs that claw at the sky. The synths really do the atmospheric work here to get one final swing at eternity before it fades away.

It’s been holiday times, so I had time to read some more than normally. I always love to see the pile I’ve gotten through afterwards. Currently enough other things to read and listen fill my shelves, so time to get on it.

There is something specifically cozy about reading books by the likes of Charlotte Brönte. It feels like this book requires you to have a cup of tea or coffee with it and really get cozy with a blanket and some nice singer-songwriter (preferably British) playing on the radio. The story is the inner thoughts and experiences of a man, devout of real heritage, who flaunts his unwanted families offers to make his own fortune in the world. It’s a story that takes us from the grimy industrial towns of 18th century Britain to the warm city of Brussels where he finds occupation as a teacher.

It is a story of character building and growth, of love and loneliness and in the end of  a righteous set of affairs happening. While I wouldn’t recommend this as a very complex work that completely blows you away, it is nice to just feel cozy and homely once in a while.

Many people might know Haile Selassie as a figure that is much revered in reggae music by the rastafarians. He was also the last emperor of a 1000 year dynasty in Ethiopia. A reformer and totalitarian in one, the man could not read or write, but ran a country as effective as possible in the limited time that was given to him as a ruler.

I bought this book in Poland, due to it having  a Polish author and also a topic of interest to me. It gathers up stories of the courtiers from Haile Selassie after the revolution. It was quite a dangerous undertaking to gather these stories in a country ravaged by internal strife, corruption and crime. Still it paints a clear image of an impossible empire that lasted much longer than it would have, it not for the smart rule of an emperor who wanted to bring together tradition and progress in an impossible marriage.

We speak of a man who dreamed of a united Africa, while maintaining an underfed population and an ever expanding nobility. A man who built palaces in the desert, while drinking water was not obtainable. He built highways and universities, but ruled without pen and paper. An amazing journey to the past.

Hannah Arendt – Eichmann and the Holocaust: It was sheer thoughtlessness that predisposed him to become one of the greatest criminals of the period.

It is hard to say something about this book. Let’s start by saying I purchased it at the Jewish History Museum in Warsaw. Tight security and still not fully open for the public, it is a book about the aftermath, about Eichmann who was considered responsible for what we now know as the Holocaust. Arendt describes a man who is a true bureaucrat, a man who loves procedures and papers and has little to no actual intellect to guide him. Stuttering and muttering his way through life, only being understandable when uttering movie one-liners, all the way to the gallows in Jerusalem.

Arendt analyses the stupid and sometimes unconscious and silly kind of evil, committed by people who just don’t think. She also discusses if it was right what happened to Eichmann. Did Israel have the right to just execute the man on their own ground? No, they did not and they knew it. If he should be executed in the end? Maybe he was the neck that had to carry the weight for all those thousands of bureaucrats who ‘just did their job’. I find it hard to judge, but so does Arendt, who leaves the reader to form an own verdict. Was this right? Was Eichmann guilty or was he just a victim of the zeitgeist? Did he ever fully understand why he was walking to the gallows? We can ask ourselves this and maybe become slightly better people ourselves in the process.

I guess this might be the most important work of Dickens apart from the fairy tales. Maybe it is not, I found that it was very poignant. Dickens shows the other side of the Revolution in France as an event that created an upheaval in society even though it might have rational and righteous causes. Dickens makes the common people picturesque and the nobility sensitive and full of class, but also gives a distinct charm to both. He doesn’t judge I feel, in his book, about the situations in France and England and whatever he may think of it.

The tale of Two cities juxtaposes the city of Paris and London with one another to the effect of showing the differences and also the effect. In truth, the English royalty reformed and reshaped with the social changes. France missed the ball on that and got itself into a nasty revolution that ended it’s royal family. Not that much changed. After the terror new tyrants arose and spend fortunes on war.

Still, the book deals with the small people. It has the romance and sacrifice of the times, but also stupidity, rigid rebellion and vengeance. Everything is in there, except lazers. I think this is a book that everyone should read and try to learn something about opposing views. Mostly that making enemies only brings grief.