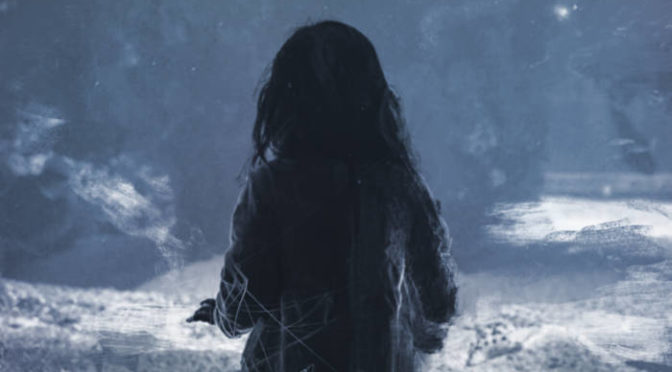 雲雀/Hibari is a one-man black metal band from Kyoto, playing a sound not far removed from the current blackgaze trend, but with a leaning to the atmospheric and DSBM side of things. The intermezzos remind a bit of Opeth.

If you want to write the name slightly more accessible it’s Hirari. The man behind the band is Ryotapon. He’s been active in 5PM Promise and Arbus, two other projects. The interesting thing about his record is that the inspiration is taken quite liberal. No holds barred, which is quintessential black metal in my book. For this band, a full band is listed, but Ryotapon is the only creator.

‘Antidote’ sets us on the path with a reluctant beginning. The tunes are like the first fall of snow. Gentle, drifting down to earth with a slow, reverberating sound attached. But once the flood gates are open the sound streams in and a moment later fully unleashes. Everything is smooth and soft, but the vocals, which are raw and harrowing, disrupting the peace. Hibari likes to interject a little Opeth acoustic, before jumping through the eyes in a warbly tremolo passage with oddly clanky drums.

It’s not much different on the eerily melodic ‘The Wheel of Sins’ and ‘Lunaj Meduzoj’, including that odd singing in the intro, making it feel a bit more like a pop ballad for a moment. But hey, that’s part of the deal and it works out pretty well as the song builds up, not unlike a Solstafir work. Cold, melancholic and gloomy is what describes Hibari best, which is just the way we like it.

Another edition of books that I read, with Plutarch, Vargas Llosa, Murakami and Kahneman. Keep on reading!

This edition of Plutarch’s writings on Sparta combines the lives of famous Spartans with an abundance of further notes and information. It’s a rather complete work for those interested in the legendary city state, that most will know from the film 300. The work of Plutarch has suffered many revisions by editors, trying to figure out a cool way to present it to the audience. Earlier I read a book by Penguing on The Age Of Alexander, where they cut descriptions of lives in half, splitting them in timeframes, since Plutarch loved to compare Greeks and Romans (preferably finding fitting couples). Thist time Penguin has decided to go for thinner books on a theme.

To compensate for the relative little amount of work, some extra resources have been added, which make this book to a rich source of information brought together under one cover. There is little commentary, but some critical notes that help the reader to relate to Plutarch and take his work with a grain of salt here and there. Truly, parts are very entertaining and others seem to be uncritical glorification. That seems to be a fatal flaw of historic works in general though.

I’ve always had a dislike to psychology, I cannot help it. This book was also kind of selected by mistake, because it was categorized as a philosophy book. Well, what can you do? I listened to this on my iPod and was very much captivated by it. Not only does Kahneman have the unique ability to make things relatable and come up with proper examples, his whole explanation seems to be aimed at generating understanding. Not trying to be pretentious (which most psychology is) and actually explaining how difficult certain lessons and insights were to gather.

Kahneman explains that we have two systems of cognition, an instantanious top-of-mind one and a secondary, analytical and calculating one.  This explains a lot about the way we act and react to what happens around us. Learning to understand this system may be vital to understand why you feel and think certain things. I would call that a great insight and well worth the read/listening.

I’ve read this book on my e-reader, which is a new toy I have, which was captivating to the end. I spoiled this book a bit for myself by reading up on who Roger Casement, the protagonist of the book, actually is. Vargas Llosa dusted of this hero of the Irish struggle for freedom and tried to write his story, without making it all glorious and epic. It’s the story of a man with pain, haemeroids, represessed sexual feelings but a moral backbone and humanitarian ideals. It’s told as a a story that might be true and shows that people are more than who they sleep with.

I’ve never really gotten into much un-Western literature, by which I mean literature with a setting away from the world I’m used to. In reading the three books that make up 1Q84, I’ve definitely had a good choice in experiencing some of that and the excellent writing of Murakami. The story is about two people who seem to traverse to a parallel world, where strange things occur. The two people have met as children and never truly forgotten eachother. Aomame is a fitness instructor, she lives alone and has a minimal life style. Her other activities include casual sex with balding men and murdering men that abuse their women for a rich lady with a grudge.

Tengo teaches math in a school and in his spare time, he is a writer. He likes to read, cook and on friday has sex with his older girlfriend. His friend, the editor Komatsu, approaches him with a manuscript, written by a 17-year old girl. He plans to let Tengo rewrite it for a contest. From here on, life becomes strange for both figures that get themselves mixed up in something bigger then them. A world where logic doesn’t count for what it does in the real world. They relive their pasts and in the end their quest will bring them together. The title refers to the name that Aomame comes up with, as an alternative for the year the story takes place in (1984). The book is brilliantly written, never rushing but also never letting you hang in there. It offers a continuous story with magical aspects, deep characters and well measured emotions.

Like many Murakami readers before me, I want more.