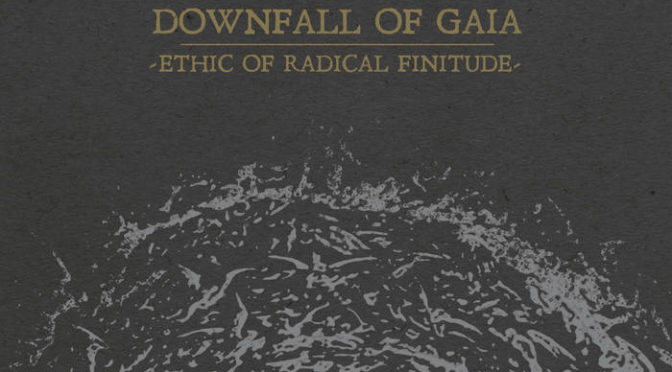 Rarely does a band blow you away so much as Downfall of Gaia does. The Germans have just released ‘Ethic of Radical Finitude’ and its a towering piece of powerful black metal. Atmospheric doesn’t do it justice, because this record rocks with accessible, grand guitar play and convincing showmanship throughout its 6 songs.

As a band, this is their fifth full length since their inception in 2008. Though the base structure is very much lying on the foundation of black metal of the atmospheric type, the band leans outward to the post-metal and crust scene in their stylistic wanderings. In that sense, they’ll probably never really leave their roots behind. The result is a colorful piece of extreme metal, full of consciousness and meaning.

Lyrically, it’s abundantly clear that Downfall of Gaia focuses on more abstract and complex topics. It explains their wordy titles I suppose. The looming darkness descends as we start with the intro ‘Seduced by…’, setting the scene. But then the veil is lifted on ‘The Grotesque Illusion of Being’, with ascending black metal, that ever pulls you up higher onto your toes. The crusted, grimy vocals really add to the feeling of unworthy beckoning of the heavens, as crisp clear sound contrasts heavily with that hoarse bark. But the track to really fall in love with is ‘We Pursue The Serpent of Time’, with that tribal drumming intro, that just keeps going as the song slowly builds up. It turns violent and the guitars move faster all the time, but always it follows a wavering pattern, like that of mountain peaks in its brilliance.

‘Guiding Through A Starless Night’ is a whole different beast. Unleashing a torrent of tremolo guitars, it just rages on and on, till al lull in the sound comes on. Spoken word passages follow with dark, melancholic words. Spoken by a woman in clear tones, with a slight tremble. But it also has these uplifting waves, those sonic enhancers of your mood and state of mind. But there’s also definitely a romantic side to Downfall of Gaia. ‘As our Bones Break to the Dance’ captures that in lyrics, but also in its melancholic vibe. yet this is one hell of a track for the rhythm section, as the blast beats just reign supreme here with a pounding, pavement cracking intensity. Hell yeah! It even falls into some horrendous barking and shouting, like barren, blazing black metal for a bit there. Good stuff!

By the time you get to ‘Of Withering Violet Leaves’, you’ve been beaten up enough. You’d think, right? Sonorous singing and wavering guitar work, an ocean of sound to dwell in, to float away in as the music is gentle and swooping, slowly fading out. A beautiful record for sure.