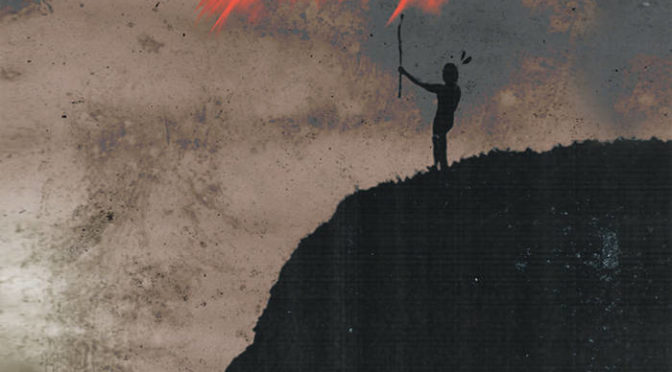 Our ancestry is often a source of pride our base of how we identify ourselves. But sometimes, it can be a cause of strive, of clashing entities. It would seem that this is at the base of what has become Ifernach. A band that looks to consolidate the Celtic and Mi’kmaq heritage in fierce black metal on this EP ‘Gaqtaqaiaq’.

Ifernach has released a series of records and though it is a solo project by Finian Patraic, has also been playing some bold live shows where knife-wielding and bloodletting appear to be a big part. Also interested in the style of corpse paint, which appears to evoke images of the native cultures of the land emulated in the music.

After a classical sounding intro, which sets the mood in bombastic tones, we move to ‘Extinction’. An eerie song with melancholic, twangy guitars and gritty, primitive sounding black metal. The vocals are also snapping, biting and raw, conveying the lyrics in French. The sound is eerie, strangely dissonant as if it comes from a different realm. In a way, it does of course. The punky beat meats intricate melodies on ‘Coeur boréal et païen’, creating an enigmatic track.

The guitar mesmerizes me constantly on this record, by invoking a kind of magic. It’s the alienness of the music, the strange different vibe it creates that sets Ifernach so apart. Yet, mostly what you hear is the sound of rebellion on a tune like ‘Elle Danse Avec La Mort’. Repetitive riffing, grooving bass and a thick palette of grimy, grinning anger, here you go. It hardly compares to the gnashing ‘Un Matin Fénien’, with a true menace to the riff.

We end the record with a traditional jam, yet even this sound ghostly and distant. It’s just out of touch with our reality, somewhere lurking in the wild. That is the spirit, captured by Ifernach.