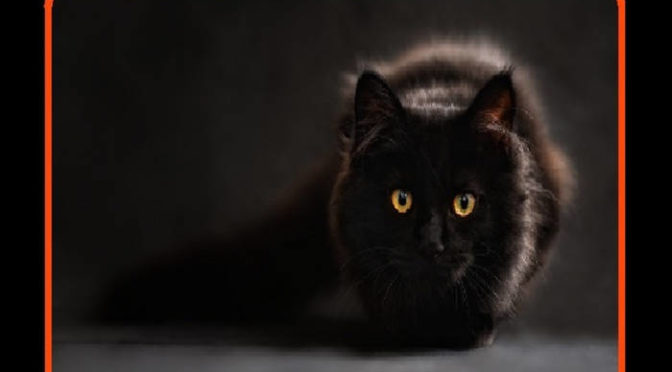 I like cats. I don’t think this should surprise anyone, because I’ve mentioned that before. So if you have an album cover that looks a bit odd, but features a black cat and a cool sounding name like Midnight Coven, there’s a fair chance I’ll check it out. And, I have to say, I do not regret listening to ‘Bewitched’.

The project is initially a solo endeavour by Aaron Baker, a 27-year old multi-instrumentalist who has several other projects going. I haven’t been able to find out much more, but there are some musical references given like Deep Purple and Black Sabbath. That’s never a bad thing in my book, so let’s get to the music.

‘Sinister’ sounds much like any witchy sounding, doomy psychy band you may be familiar with. Angsty, creepy… Think Uncle Acid & The Deadbeats, but a bit on overdrive on vocal effects. It’s cool. And weird. I guess both. I don’t get why the sound is rather wonky though. It wasn’t my headphones, I checked. What it does, is add a little spooky vibe to the song. The same goes for ‘Blood on the Wall’, which at times feels as if it’s merging all parts together into a formless mass of evil creeping up to you. The vocals are something else though, and might even hint at modern psych bands with that nasal tone that keeps sorta poking at you.

But let’s get down to the more doomy, theatric side of the record with ‘Midnight Summoning’. There’s certain bombast to the sound of the streaming guitars. A lot of space is left for those stadium rock-Oasis riffs that blow out with a slight dissonance as you’re familiar with from many pscyh bands. That slightly snotty whingy vibe, but Midnight Coven can do the riffing too in a grand heavy metal style. Just listen to the opening of ‘Corporate Slave’. Tell me that doesn’t sound like ‘Looks that kill’ by Mötley Crüe’. And that’s a great tune, so it works well here too in that specific vibe. At times the sound can be a bit highly processed though, which is very audible on ‘Welcome to the Horror Show’. The drums feel mechanic, the bass is just too perfect, and those soaring sounds in the back make it feel like you’re listening in a very, very tiny room. Does the job, though.

So, Midnight Coven is simply weird. It’s a weird sounding band, and therefore really cool. On closer ‘Conditioned Nation’, I like the flow, but I feel as if I’m listening to a synth track at some points. The lumbering guitars are so thick, like a frosty milkshake. The vocals are very clear on this track, though, which creates a unique vibe. I say, just check ‘m out.