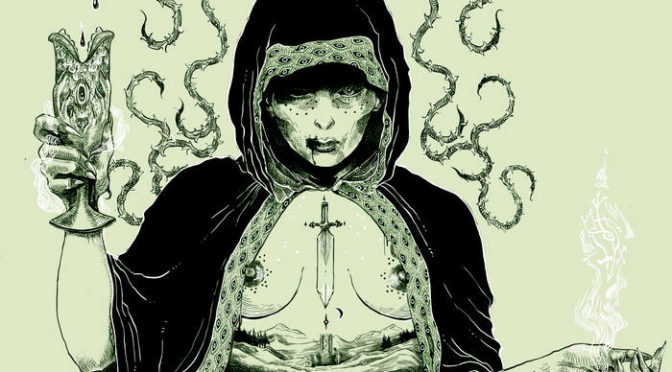 From the far Galway, Ireland, comes the act Neamh-Mharbh, who play a distinctly dark and gloomy bit of atmospheric black metal. It seems the west of the green island has a particular knack for the utterly dark and haunting you’d say.

Little is known about the band, and the only connective point I’ve found is the mention of Ben Merlin Wilkinson from the UK-based Where The Crows Gather as a guest vocalist on ‘Excursion of Cathrain’, linking the band to a wider UK black metal movement keen on the atmosphere.

The sound that greets you on ‘Genesis’ is unlikely described as atmospheric black metal. Yet, the band might actually more approach a sort of churning funeral doom with its slow, leveled drones. Deep, guttural vocals resound from the bowels of the earth. We do move more towards that black metal barrage on ‘The Terror of the Revenant’, though the sound never gets a flowing motion to it and sticks to the simmering and seething sound, offering a blood-curdling sense of doom.

As in a three-step rocket, it’s the track ‘Excursion of Cathrain’ that goes full on in its ascending riffing and tumultuous drumming. A fierce grasp to the heavens in full vigor and vitality. The record takes a turn on ‘A Grave of Thorns’, where a folkish, tribal tune slowly unfolds. A sense of serenity comes over the listener, as the slow, throbbing wavers like a fog over the hillsides. It’s a simple sort of beauty, hard to dismiss. The vast atmosphere comes to a close with ‘Remission’, which may be the best song of the album yet.

This record was a surprise, as the cover left me a bit puzzled. Yet, this record is a remarkable piece of heavy, captivating atmosphere that tells you something of its origins.