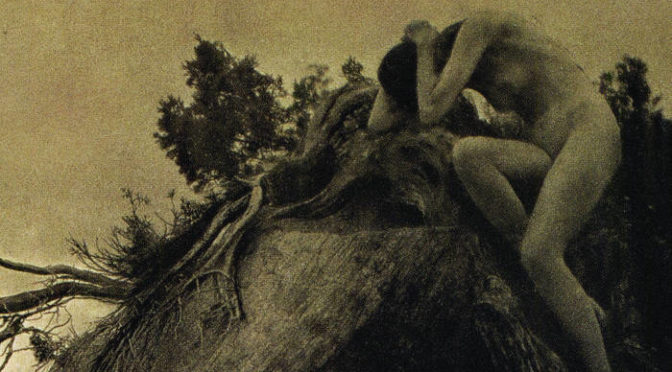 I would much rather debate music than politics, but when it comes to the progressive message this may be the most punch-packing-package deal you can get. Ragana and Thou combine their strength for an exceptional split, titled ‘Let Our Names Be Forgotten’.

Thou from Baton Rouge has been prolific since 2005 with a long string of top-notch releases and a clearly voiced message. Their latest full-length ‘Magus’ has landed them a show at Roadburn even as a next highlight. Ragana is a genre-crushing duo from Oakland, who have dubbed their music witch doom. Combining the best of ethereal vocals and mystery with crushing core elements, they’re a force.

The opener ‘Inviolate’ opens with sensitivity and slow passages. It’s almost hauntingly beautiful, which makes the launch into screams even more powerful and hard-hitting on this short exertion by Ragana. The band has a penchant for a sort of witchcore or witch doom, full of seductively beautiful music and harrowing bursts to contrast. I’m making up that term as I go, but it also refers to the Baltic origin of the name. That aspect returns on ‘The Void’, with vocals that have that desperate tone you hear in the work of Chelsea Wolfe and the like. The doomy riffing, the totured screams, it goes to the marrow of your bones with Ragana, as if clawing towards ‘The Sun’. A particular spin on the classic, most slowly progressing doom legends. It’s magnificent.

But Thou is no lesser force obviously, and ‘The Fool Who Thought He was King’ is an instant demonstration of that. Vitriolic screamed vocals over crunchy doom, with that right level of distortion and melodic mournfulness. A dirge-like texture, that weaves onwards as the voice snaps at the listener. The song than starts unwinding into a wavery, post-rock track, that drags the listener along as everything seems to slow down into a sticky, pulling motion. ‘Death to the King and all His Loyal subjects’ closes the record, with a threatening, ominous note. It’s a gritty, drudging tune that drags you down and down with it. We definitely end on a great not here with Thou. Excellent.