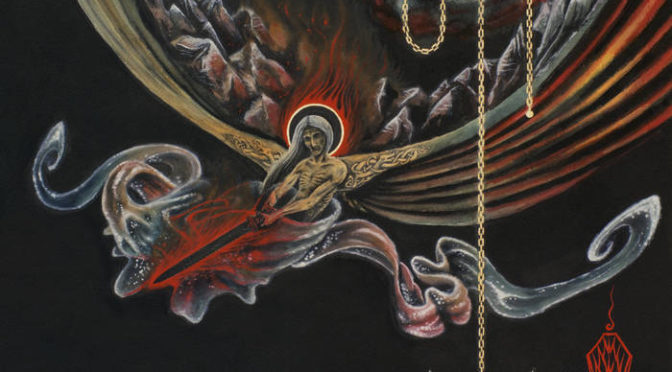 A lot of stuff that comes out from Iceland is cool, but this band is partly American and that probably puts a little twist to the sound of Guðveiki. I’ve been trying to puzzle together how this group got together for their debut album ‘Vængför’, but I have to guess at that.

One of the few communal factors among the mountain of bands these gents have been involved in is Martröð, as this connects guitar player A.P. and Wormlust’s H.V. on vocals it seems. Chaos Moon then connects drummer J.B. and guitar player S.B., who both played in Accursed Moon. Other names on the resumés include Krieg, Skàphe, Vital Remains and much more. Oh, now I forgot Þ.I.from Endalok on guitar and atmosphere.

But really, nothing can quite prepare you for ‘Fóstureyðing stjarna’. The onslaught of death metal battery, unholy howling and barking are unlike anything. Solid death metal with a tinge of black and that creepy intro, it absolutely crushes! Vocally, you already know to expect utter madness with H.V. as he does with his own project. During ‘Blóðhunang’ it is almost as if his voice curls around the guitar riffs and binds them into a soggy swamp of sonic despair.

‘Hin endalausa’ continues the surge and I can’t really add anything to what I said before. The drum assault takes on a more cavernous and at times even industrial vibe as we progress into the title track. The singing almost feels like Attila Csihar’s ritualistic murmurings in some of his stranger projects. That is even more so the case on ‘Gullveigar sverðsins’, which has these claustrophobic melodies and ever encroaching riffs that make you feel trapped. We finally come to full release on the more traditionally laid out ‘Undan stormi eiturtára’, though that mad shrieking, the coiling sound is still there and, honestly, I’m almost happy to escape this utter madness. What a piece of sonic violence! 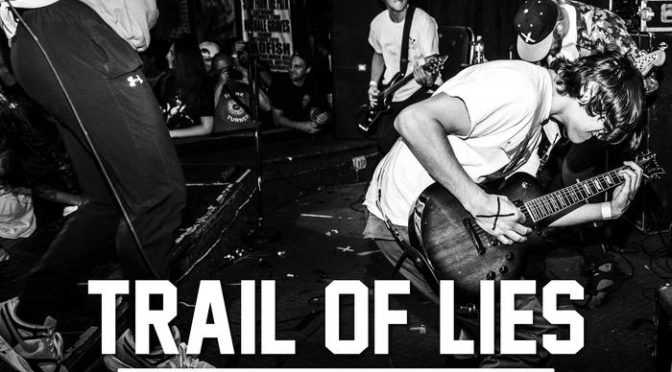 Hardcore bands come and go at a rapid pace. It’s one of those things you can count on it seems. Trail of Lies has been kicking about for a while now and seem to stay their course in the landscape of tough sounding, breakdown filled tunes. High-strung hardcore music provided on their new record ‘W.A.R.’.

The band hails from Syracuse and is considered a straight edge act. Featuring members from Naysayer, Forfeit, and Warhound, they’re something of a hardcore-powerhouse, influenced by 90’s hardcore from the east coast of the States. This is definitely the sound that inspired me in the early days of my music quest and stumbling upon them definitely was a joy for the ear.
We kick off with the tune ‘Master of My Destiny’, which is a balled-fists power anthem for the self-empowerment so typical to hardcore music. Pounding rhythms and vocals that rip apart the vocal chords. This heavy hitting, battle-ready trajectory flows forwards through the rest of the record. Always full of fire and passion, driving for a mosh-worthy sound.
Lyrically, the songs fuel the fire with the hardcore staples of breaking stuff, breaking free, brotherhood and self-reliance. Add to that the straight edge lifestyle and you have a true sound of dissent in a society that more and more edges towards hedonism and herd mentality. If there ever was a time, where hardcore was needed, it is this one. Straight up hardcore, with a message and some balls, that’s what you get here.

Fun fact, the day I became a student, I was full of energy and life and the same night I went out in Eindhoven with a friend. We went to a place called The Bunker, which was sort of the student watering hole in the city to see a band that was playing in the AOR (Algemene Ontmoetingsruimte). One of those bands was The Mass. I bought a t-shirt, I wore it forever. Now they’re back with this EP.

The venue closed not much later with huge debt, which sucked. But that night, was a special one full of optimism and a sense of freedom. The Mass was an awesome band with a distinct sound, probably dipping into the post-hardcore sound but much more avant-garde at the same time. ‘Ghost Fleet’ is a return to form for the fourpiece.

The record kicks of with an instant hectic swirl of guitar blasts and shouted, frustrated vocals. The sound is hooky, unpredictable and lacking in cohesion it seems. It’s all there, but the listener is constantly challenged. ‘Threshing The Light’ makes the band feel like one of those experimental, gritty bands on the Dischord Records label. Unexpected element is the saxophone. That is even more present on the next song, where the band is really moving into jazzy terrain. “Neuronic Channels Driven to Agitation” is a funky, screaming instruments jazz jam that goes on for just long enough.

Both elements come together on the nervous ‘Don’t go whaling high’, with heavy, Meshuggesque guitar breaks and the spiralling crazy jazzspeditions by the band. It stays towards the heavy, creative side of music and the record this far is one with a punkrock grit to it. Sludge elements, grunge ferocity and a whole lot of rage to go berserk to during a live set. Still, there’s always that radically different aspect to the sound of The Mass. Think of bands that just sound different enough to be awesome, maybe even Refused.

All corners of the world in this sounds of the underground with Skáphe from the USA/Iceland, Wildernessking from South Africa, Burial Dust from Bangladesh and Cadaver Eyes from Israel.

I came across these guys, while doing a SoU about bands from Iceland. They were cool, but not Icelandic, so you get them now. Skáphe is a band from Philadelphia in the United States (partly Iceland too) and this album came out after Trump started rampaging across any sort of decency that you’d find. I guess it is what fuels their anger. The band sounds pretty much like they’re actually part of that Icelandic scene and are indeed part of the Vánagandr group, which in its own peculiar way is embrasing the nidrosian idea of pure, back to basics black metal. I feel that this is in large parts what you get when listening to their relentless record.

Think of early bands like Blasphemy and you get a similar, overwhelming and raw delivery. The sound in general is a roaring and thunderous one, with little subtlety. There is a slight bit of that tremolo guitar sound, you’ll find in the post black-metal bands now usually, but it’s used sparingly. Cacophonous sounds peep through the solid wall of sound now and then, offering you a glimpse into the swirling malestrom of madness behind it all. The whole recording seems to have done in a concrete storage hall or something, because there is no sense of subtlety or grace to the sound of these Americans. Only after the full album I checked its members: D.G. is known from his work with Misþyrming and Naðra (see this SoU#33) and Alex Poole, who did his thing in Krieg, Esoterica and Chaos Moon. Things make more sense to me now.

I had to check it twice myself, black metal from South-Africa? That seemed wild. Not because I don’t think it shouldn’t be played in Africa, but the relationship seems like one that is bound to face with troubles. Wildernessking has been around for a good while though. In 2012 they released their debut, but in 2010 the band formed under the moniker of Heathens. The range of topics is broad and obviously inspired by the countries own nature and sensibilities. The Cape Towners fill their music with progressive elements to create something unique.

Think Winterfylleth, but set in the wide stretches of land of South-Africa and with probably better weather. You can hear that sensation of sunrays in the warm and beaming feel of the riffs. Though intensely played and full of hard work, the sound feels languid, relaxed but also danger lurks. The bestial roar of Keenan Nathan Oakes rips through that languid mood with an urgency, while the riffs smoothly cascade onwards in a dramatic though doomy way. There’s a longing or lamenting in the music and voice that grip you. It’s that amazing sincerity that makes this feel so good.

Bangladesh is starting to develop it’s very own black metal scene, with primitive, furious and quite convincing. The main theme appaers to be the ancient death cult and occult religions, but more than anything the denunciation of the false gods that rule our society. Reminds you of Norway some decades ago? Bands like this show that black metal has matured and found a deep rooting within counter culture and anti-religious thoughts with serious followers. Wether that’s a good thing, is not up to me to decide, but it lends a certain gravity to the expression in the music itself. The title translates as ‘Ominous call’.

Though the sound may come off as pretty lo-fi (necrosound!), it works in the favor of the band in the sense of aura and vibe. Blistering, crackling blasts and deep, unearthly gutteral vocals show the mixed ancestry in both the death and black scene, giving a similar feel to the band as the primitive origins of Mayhem and Darkthrone (maybe even a little of the more death orientated sounds of Von and Morbid). The attentive listener can detect some oriental influences in their sound, where the evocation of ancient Egyptian deities is no strange occurence. From the guitar crescendo’s to the unbidding chasm of the vocals, this is a powerful bit of dark magic.

Sometimes you get these requests that sound just too intriguing to be ignored. This Israeli band claims to implement elements of doom, noise and experimental sounds into their product and that alone is quite peculiar. The sound that you experience when listening to it is even more weird and unsettling then you’d think. To give a bit of context, the band is a project more than anything, based in Jaffa, Jerusalem and New York. Bandmember Zax indicated in his e-mail that he also plays in  Lietterschpich and in Hyperion Ensemble, along with drone deity Stepehen O’Malley’. It should give you some context on what these guys are doing.

The line between fucked up noise and brilliance is a rather thin one, leaving a band to be often misunderstood. As one, I presume Chinese, site described Cadaver Eyes: “in these music there is nothing but amounts of buzzing”. Brilliant quote, but there’s much more to it. The base of the music is a drone that truly unsettles the listener, specially when David Opp (also Lietterschpich, Balata etc.) starts barking at the listener through a fog of distortion and rage. The drum patterns make little sense, giving you hardly any space to breathe and find a calm in the music. Though it lacks a certain sonic intensity, the experimental, fuzzy crackling of electronics gives no quarter. The record also has two cover-like tracks, one being ‘Acetone’ by Mudhoney. You can’t go wrong with Mudhoney, but for some listeners Cadaver Eyes might feel like you’ve really been walking down the wrong kind of alley.