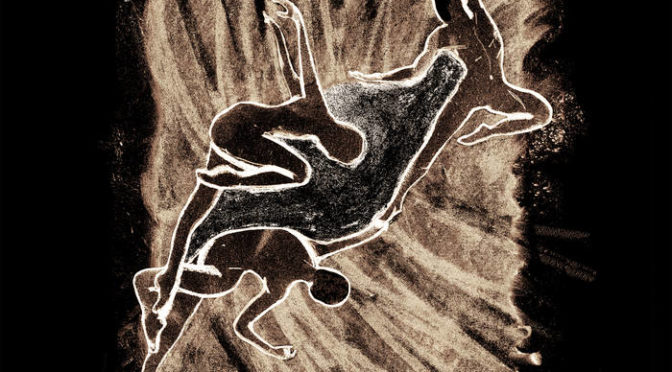 Laster is an oddity in the black metal universe. Not just in the looks, but musically the band leans heavily on something completely different as their peers. Though 2 of the members are active in more rootsy black metal band Nusquama, their sounds are more like those of Grey Aura than any of the more conservative projects. And their latest statement is another gem.

‘Het Wassen Oog’ is already the third full length by the Utrecht band, maintaining their sound and visual aesthetics. This time on Prophecy Productions, a label open to that which lacks categorizing. I’m not sure if it will appeal to the more conservative listener, but as a fan of the experiment and expressive, I enjoy very much the sound these guys produce on this album.

‘Vacuüm ≠ behoud’ maybe references clearly one of their influences, by addressing the theme of a different world and closing with the line ‘Ceci n’est pas un souvenir’. Is that a nod to Alcest (‘Souvenirs d’un autre monde’). It wouldn’t be surprising as the music is filled with the sweet sounds of postrocky/shoegazy passages. Dreamy, yet also containing harsh screams, the music offers a strange contrast, that is eerily beautiful. It allows you to sink into the obscure dance music.

Often there are these peculiar, repetitive parts that have something carnivalesque, that mesmerizing mystery of the circus. It is a different kind of dark, but equally alluring in their music. This can be heard on tracks like ‘Ondersteboven’, which also has a funky bass line, but also ‘Weerworm’. In between, ‘Haat & Bonhomie’ breaks the mold and surges into classic black metal in all its formal fury. Yet, there’s always a mystique. A movement, a dance between the instruments. It simply feels enjoyable, inviting, and fills you with excitement.

It’s hard to really put to words what Laster submits you to, but it’s a highly immersive experience. Catchy, surprising and still very much true to the essence of what this black metal record should sound like.