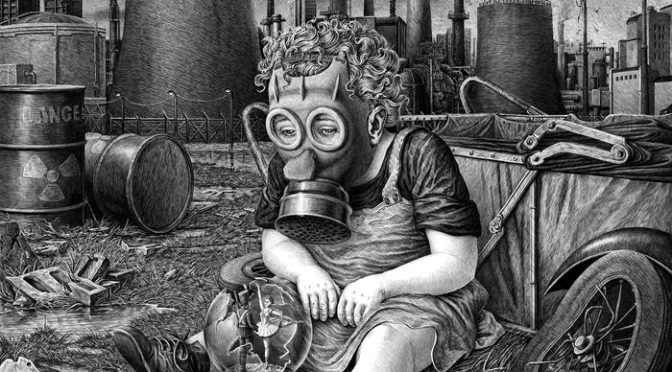 Label: Heidens Hart
Band: Meslamtaea
Origin: Netherlands
Some more bubblings from the Dutch black metal sewers here with the new release by Meslamtaea. Out on Heidens Hart records, this is the second release by the band, who have gone through a mild transformation in between their two releases. ‘Niets en Niemandal’ seems to hint at the destruction humankind is wreaking upon this world. Perhaps as urgent as ever for a band that is drawn towards the past.
The duo both play in Asgrauw and have done a split with that band, but also two with legendary Dutch black metallers Cultus. All in all, that makes it easy to place them in the right corner between forward-thinking and essentialist black metal under this banner. And that’s pretty much what you get on this record.
Spoken-word, thunderous preaching opens up ‘Neonschemering’, which ads that post-apocalyptic vibe to some traditional themes. The firebrand vocals are as doomy and gloomy as well, summoning the dark. Yet a little more mellow is also an option on ‘Weer een dag’. Overall there’s a nostalgia, a yearning, that is captured in the sound of Meslamtaea. The tremolo riffing just stick to that minor note and even though it’s played fast, it creates a languid feeling.
At times the riffing really takes a slow, clingy vibe, like on ‘Leegte’. The reverberation feels like a thick summer air, where you can almost feel like you move through mud. Loss, confusion, it’s all there. ‘Verlaten Stad’ is another notable tune, thanks to its thick, layered riffing. But it also has some simple music, almost melancholic Americana going as an intermission. For some strange reason, that works extremely well for me. It then fills, swells and becomes again the song that it was. It’s beautiful.
The strange ‘Vervreemdingszone’ is then the outro, taking us out of the song with strange, dissonant sounds. It leaves you a bit confused. But I think, in a good way.
Logging In...