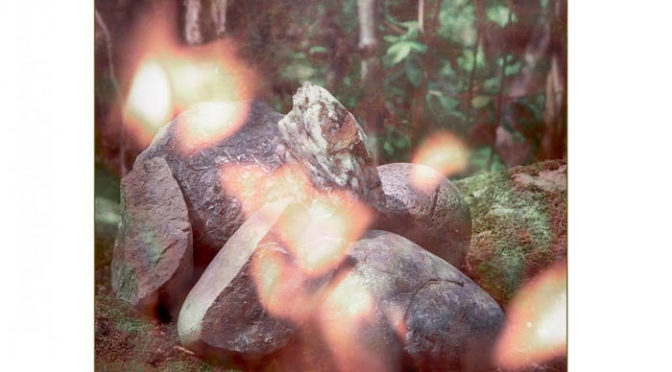 qqqØqqq is a project dedicated to silence. It’s a creation by Tomasso Busatto (Plasst) on synths, who also runs the Casetta label and Carlo Mantione (Contemplatio) on guitar and pedals. Their sound is a dedication to silence, to meditative calm and the serenity that can be found in there.

The duo hails from Italy and has a certain affiliation with murmur mori. Their music could be described as minimalist and meditative. Their record is out on Casetta, but also on E’ Un Brutto Posto Dove Vivere , Contemplatio, Dreamingorilla Records and Insonnia Lunare Records. This is the sound to immerse yourself in and simply drift away.

The music feels like triphop meets postrock, with plenty of audio samples. The sound has a certain flat flow to it, which just carries you along without ever deviating from its continuation. At times the sound swells to a more violent timbre, but never leaves the current where it is in. Particularly ‘All this Heaviness is just my monolithic self’ stands out by its intensity.

It’s peculiar how spacious the sound can be of qqqØqqq, because the sound at times feels so immense as if you are completely getting lost in it. Ethereal and earthy at the same time, the lazy beat and eerie soundscapes offer a profound expression. The titles appear to refer to states of mind, which are invoked by the sound. For example ‘Crumbling plains and burning stones of consciousness (Feat. H!U)’ has a certain forlorn sound to it. The slow beats crush anything that is still out there, untill only void remains.

This is how qqqØqqq completely blows you away with abstract sounds and immersive beauty. Classify this as ambient or drone, it doesn’t matter, it’s music for the mind.