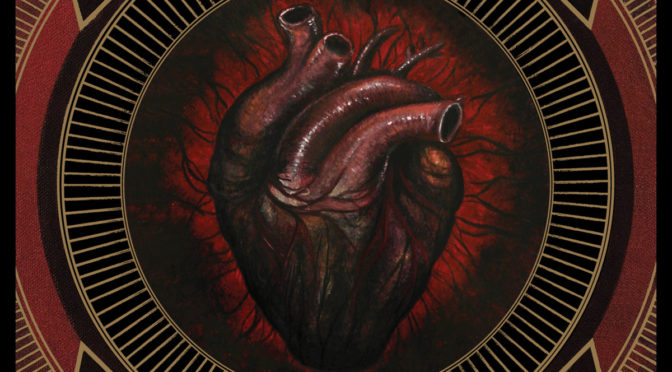 Stephen Lockhart is a man of dedication and after leaving his native Ireland, he has hooked up with the Icelandic scene ever since. The man played in Sinmara but has also returned to his own project Rebirth of Nefast after almost 10 years. The album ‘Tabernaculum’ is an extraordinary work of art and one that has been in the making for years due to the desire of Lockhart to make something monumental.

Rebirth of Nefast has not released a full length before ‘Tabernaculum’, but a demo and a split. Lockhart has in the meantime also played in Myrkr, the epic Wormlust and Haud Mundus. There’s a reverie with which to approach a record, that took so much honing of the craftwork to make. I feel awed by it’s magnitude and force, but what a great listen it is!
Great, but not easy, because ‘The lifting of the Veil’  opens with an 11-minute bombardment, introduced with eerie tones, which surges over you like a tidal wave. As the abyss itself slowly unfolds, the warped, guttural words creep out. Whispers and soft picked notes create an even more dense atmosphere as if fumes rise up and envelop the listener. And then… you go off into the deep end with Rebirth of Nefast.
The trick is not to rely on sheer ferocity, but the suggestion of that. When this band has swallowed you whole, everything starts to sound huge and foreboding. Sure, when ‘The First Born of the Dead’ kicks of, the blast beats are heavy and hitting where it hurts, but they’re balanced, controlled and carry the atmosphere with them. The sound simply flows, like a dark horde in the night. Full of strength, but never needing to fully put it on display, the record is one of the best things I’ve heard in a while.
Closer ‘Dead the Age of Hollow Vessels’ feels ashen grey, full of vitriol and with a mild hint of melancholy. It’s all there on this album, ready to be absorbed into your bloodstream and cool your heart.
Logging In...