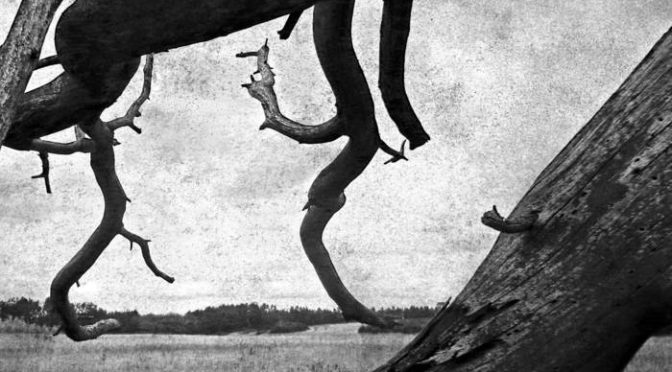 Rimruna hails from Berlin and its two members are also active under the name Drangskapur. Rimruna has been active as a project since 2011 and this album is the second full length for the duo. The last one came out back in 2014. The title ‘Der Hatz Entronnen’ translates as ‘Escaped from hate’.

The music of Rimruna fits well into the German tradition of folk-flavored, atmospheric black metal. Thematically the band appears to have a particular fascination for the winter season. Much effort goes into the lyrics for this band it would seem. They are written in German, which might be a bit of work for you, but totally worth it. Being part of the Naturmacht stable, this group fits right in with their sound.

The dark folkloric sound is as dark cloud gathering and following you. Strong, galloping rhythms and drum rolls hit home, while the guitars seem to produce a thin but compelling sound of swooping dissonance. The gnarly vocals are as bent and twisted as old tree trunks sticking out from the snow, with the particular bite the language allows for.

The sound holds a clarity, which gives it a direct and melodic feel. On the other hand, it also makes particularly the rhythm section sound pretty raw and aggressive on a track like ‘Tor der Zeit’, where the melodies meander past, while the drums assault the hearing. That contradiction in sound is one of the great alluring powers of Rimruna, who truly drag the listener in all directions and often sound close to some of the blackgaze bands of these days. The sound is harrowing, but filled with melancholic melodies that take the listener along.

Still, the sound is rooted in raw black metal and that is what you get mostly. The tremolo guitar play on a song like ‘In Ewigkeit Versunken’ takes nothing away from that, but just makes the story and flow of the album so much more captivating and pleasant. This certainly is a good bit of music!