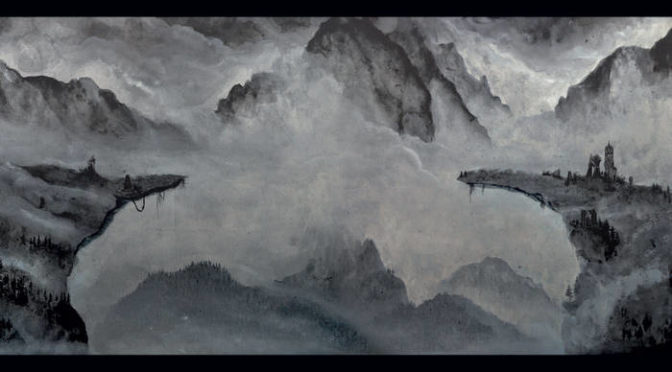 ‘Spukgeschichten – Anciennes Légendes Des Alpes’ is a very peculiar release. Four sides, but a 3-way split release from the bands Tannöd, Rauhnåcht, and Hanternoz. Every band gets a side, and Rauhnåcht filled side D with field recordings from the Alps and a joint rehearsal.

Let’s start introductions with Rauhnåcht, which is a one-man enterprise by excessively productive Stefan Traunmüller(Golden Dawn, The Negative Bias, Wallachia), who focusses on Alpine legends and heathenism. Tannöd is a mysterious collective that plays Alpine black metal. This is actually their first release. Hanternoz from Angers expresses Breton and French legends in their Celtic black metal.

After the gentle intro ‘Höhlenzauber’, Tannöd really bursts loose with an almost Burzum-like screech on ‘Die Schwarze Wolke’, accompanied by the screeching, eerie guitar play that almost feels like it cracks and breaks at the edges. The thin sound grabs you by the throat, with its unrelenting battering, particularly on ‘Schicksalsschlacht’, where Tannöd really excels with their cold and anguished sound, truly taking cues from some of the best aspects the genre has to offer in my humble opinion. Their sound can also be a bit more polished, edging more towards the sound of Equilibrium. Definitely, a band that impresses here on side A.

Rauhnåcht comes in on side B with ambient nature sounds and a slowly progressing guitar and drum intro, on ‘Der Einsiedler’. Chanting accompanies the gentle intro, which immediately sets the calm, majestic mood of the Alpine peaks. The atmospheric black metal progresses slowly, with a particular melancholy and humility among the rising peaks. The chanting and booming drums evoke imagery of ancient inhabitants of these regions. The sound whips around you, like the eternal gale. Full of mystery, the music of Rauhnåcht is a spectacle in itself.

‘Le Baron Des Adrets, 1513-1587 : La Légende Noire Du Dauphiné’ is the first track on the C-side by Hanternoz, a story of a notorious character during the reformation. The track is notable, because it contains a lot of spoken word, together with rich sounding folk metal. The tormented vocals hit you even harder when delivered through a blast-beat induced fog. What I find peculiar about their sound, is how open it is. It feels a lot like Enslaved, but then clashing in mid-air with Peste Noire thanks to the raw, barked vocals. Smooth production, big stories, it makes Haternoz a pretty exciting band to listen to. Tracks like ‘Diables Des Cloîtres Dans Les Monts Du Matin’, show a band that really fits in with the rural French rebellious sound.

The D-side is utilized by Rauhnåcht, with a collaborative rehearsal of the title track. It’s a jagged endeavor, full of fury and rage. The sound batters you like an alpine hailstorm, while the vocalist barks at you a demon of the night. Sharp, snappy words snap like a whip. This is some other side of the band, which completely turns around again with ‘La Voix Des Alpes’. For a bit over 11 minutes, simply field recordings from the alps, offer you a peaceful outro.
This record is peculiar, to say the least. The bands are vastly different. Tannöd has a very classic, eerie feel, while Rauhnåcht excels in the atmospheric and essentialist sound. Hanternoz is where the French farmland meets the soaring peaks, captured in notes. The exceptional material on this record, is well worth adding to your collection!
Logging In...