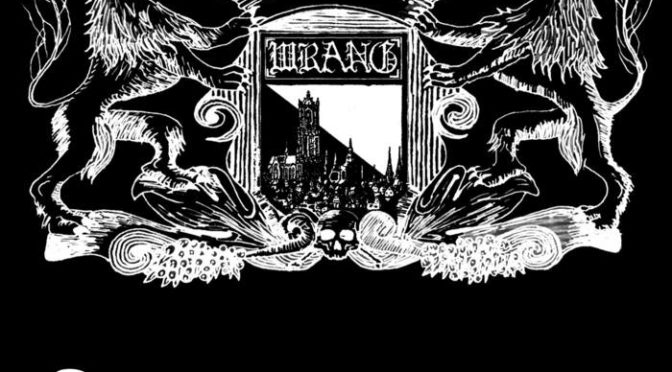 With this album, Wrang is dedicating the music to their home city of Utrecht. It’s also known as the Domstad and as you can see, that’s what the title refers to. This is their first full-length, titled ‘ Domstad Swart Metael’. Truth be told, it’s quite the remarkable display of Dutch black metal!

Members from the group have also been active in Weltschmerz, Grafjammer, Nevel and Iron Harvest, but of course many, many more. Their debut full length is only five tracks, but what a pummeling force of violence it contains.

Well, let’s destroy everything today with a wry smile on our faces, right? Wrang launches into the anthemic title track with gusto. ‘Domstad Swart Metael’ is an 8-minute show of force with an overwhelming opening and visceral patterns, all interwoven in violence. The music is particularly tight, with here and there some surprising chanting passages by the Utrecht black metallers. Singer Galgenvot is particularly present throughout the record, but on ‘Propaganda der Afvalligen’ we also hear some kick-ass guitar riffs with a bit of a classic heavy metal vibe coming on.

Regardless, the band sticks to doom and gloom, with heavy sizzling passages, like that fire and brimstone intro of ‘Stormend naar de Nietigheid’. It’s a song full of capturing melodies and darkness, delivered very meticulously once more. The driven pace is whipping the song up in a frantic bit of violence, but how good is that? The song builds to its rabid crescendo and then it simply falls apart. It’s only a prelude to the violent upheaval that is the final tune of the album. This record firmly establishes Wrang as one of the slickest and bad-ass black metal bands from the Netherlands, and that’s saying something!